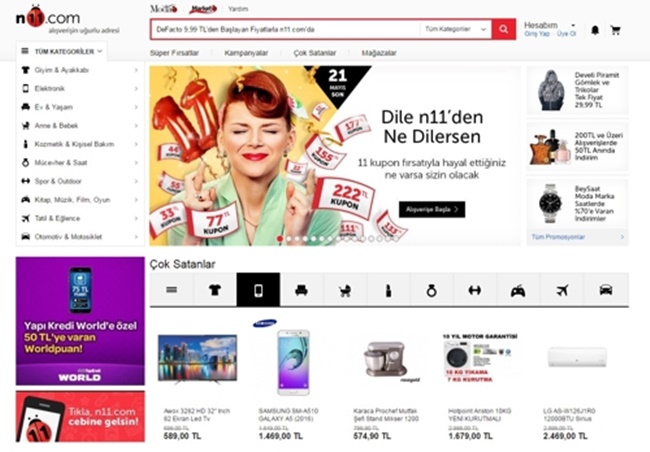 SK Planet currently runs four regional offices in Turkey, enabling the operator to secure and offer product lineups at the most affordable prices and greatest value, it added. (Image: Yonhap)

SEOUL, March 28 (Korea Bizwire) – The Turkish unit of the e-commerce platform run by South Korea’s SK Planet Co. eclipsed its rivals in terms of turnover for the second consecutive year in 2016 on the back of brisk growth in visitors and merchandise sold, the company said Tuesday.

N11, the Turkish version of 11st, saw its annual transactions grow by 23 percent on-year to US$563 million at the end of 2016, maintaining the lead from the previous year, SK Planet said in a statement.

The number of its monthly visitors also grew by more than 20 percent to 18 million over the cited period.

The robust growth is largely attributable to an increase in both subscribers and sellers, which soared 33 percent to 8 million and 63 percent to 62,000 in the tallied period, respectively, the company said.

Since tapping the Eurasian country in 2013, SK Planet has stepped up efforts to expand its foothold by bringing in a variety of local products to its merchandise through clinching contracts with local vendors there.

SK Planet currently runs four regional offices in Turkey, enabling the operator to secure and offer product lineups at the most affordable prices and greatest value, it added.

“We plan to further pioneer the online shopping market in Turkey by offering tailored services and a wider range of merchandise so it can become a win-win arrangement for the company as well as the sellers,” Cho Won-yong, the chief of the Turkish unit said.

SK Planet recently launched an international site in Thailand in February, the latest after it opened the e-commerce platform in Turkey and Indonesia.’