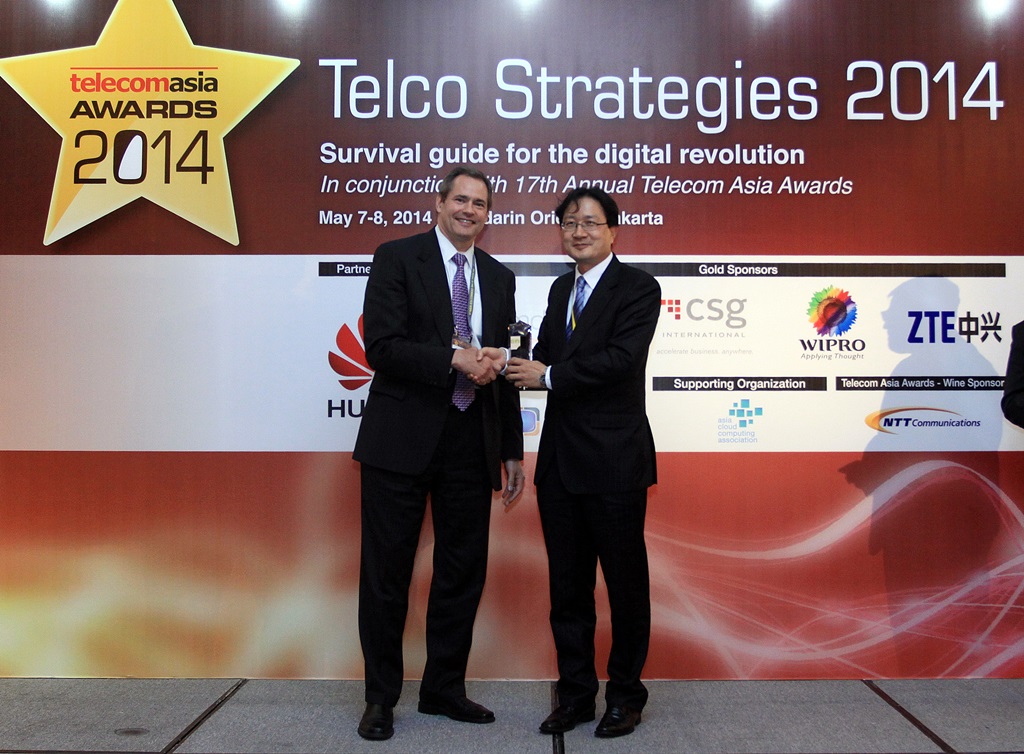 SK Telecom has been consistently at the forefront of mobile innovation, from LTE to mobile services and web applications. (image: SK Telecom)

Seoul, May 8 (Korea Bizwire) – SK Telecom today announced that it has been named Asia’s best mobile carrier for three consecutive years at the Telecom Asia Awards held in Jakarta, Indonesia.

The prestigious industry award recognized SK Telecom for its continuous efforts and achievements in the mobile industry. Once again, SK Telecom cemented its position as a technology leader in the global mobile industry by commercializing the world’s first LTE-Advanced network on smartphones through Carrier Aggregation technology that combines 10MHz bandwidth in 800MHz spectrum band and 10MHz bandwidth in 1.8GHz spectrum band.

As demonstrated in its recently-introduced innovative data products and price plans, SK Telecom’s multi-faceted efforts to provide optimized services to customers continued. Among them are unlimited data plans for LTE and LTE-Advanced subscribers, as well as optional data plans namely “Unlimited Data Option for Commuters” and “24-Hour Data Double Option.”

Also, the company has introduced innovative services including a new communication platform named T Phone which replaces the existing dialer and provides new, useful functions for making and receiving calls.

In its 17th year, the annual Telecom Asia Awards and Conference is the region’s longest-running and most prestigious telecom industry awards and event. The winners were selected by 23 independent judges based on criteria of innovativeness and performance.

“SK Telecom has been consistently at the forefront of mobile innovation, from LTE to mobile services and web applications, and has done so very profitably in a fiercely competitive market via a diversified and flexible business model,” said Telecom Asia group editor, Joseph Waring.

At this year’s award, SK Telecom’s CEO Ha Sung-min has also been named as “CEO of the Year” for his contribution to the global mobile industry and strong leadership in a very competitive LTE market.