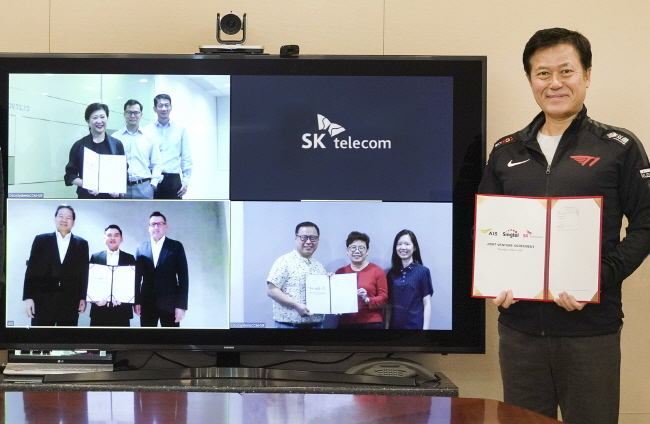 SK Telecom CEO Park Jung-ho poses for a photo after signing an agreement for a joint venture with Singtel and AIS following a video conference at his office in Seoul on March 5, 2020. (image: SK Telecom)

The three companies will have equal shares in the joint venture, which will start its services later this year.

The latest deal marks the expansion of the partnership signed between SK Telecom and Singtel last February. Then, the two sides agreed to cooperate in the region’s gaming sector.

Instead of developing mobile or online games, the joint venture, whose name has yet to be unveiled, aims to provide a global social network of gamers and operate businesses related to esports and media content.

Its services may include broadcasting esports competitions using virtual reality technology and making video content of professional esports players, according to SK Telecom.

SK Telecom said it took about a year to complete the project, adding that the companies will keep searching for new partners and game developers that can help the joint venture.

SK Telecom has been one of the active telecommunication firms expanding its presence in the gaming industry.