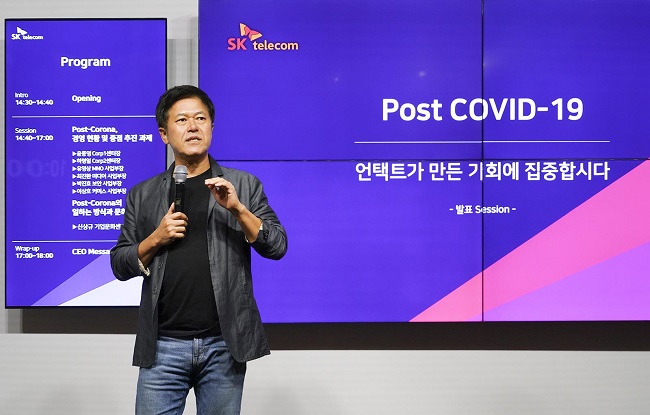 In this photo provided by SK Telecom Co. on June 7, 2020, SK Telecom CEO Park Jung-ho delivers a speech during a town hall meeting at the company’s headquarters in Seoul.

SEOUL, June 8 (Korea Bizwire) — SK Telecom Co., South Korea’s leading mobile carrier, plans to expand its network of ‘base offices’ in metropolitan areas aimed at enabling all of its employees to commute within 10 or 20 minutes.

According to SK Telecom, CEO Park Jung-ho held a virtual town hall meeting on Wednesday under the theme of ‘post coronavirus’ at the company’s headquarters in Jongno District, Seoul.

During the four-hour meeting that was live-streamed online, Park unveiled the plan to expand base offices throughout metropolitan areas.

SK Telecom has experimented with a variety of work modes, including telecommuting, since the outbreak of the coronavirus, and has recently expanded base offices.

Starting from April, SK Telecom has run base offices in Seodaemun and Jongno in Seoul and Pangyo and Bundang in Gyeonggi province.

The employees living in the neighborhood of these areas can commute to the base offices concerned.

SK Telecom said it is reviewing the idea of adding base offices in Gangnam, Songpa, Ilsan, Gangseo, and Mapo.

Under circumstances in which so-called ‘untact’ interactions are emerging as a central trend in the wake of the coronavirus pandemic, the concept of a network of ‘base offices’, part of an office-free model, is drawing good reviews from its employees.