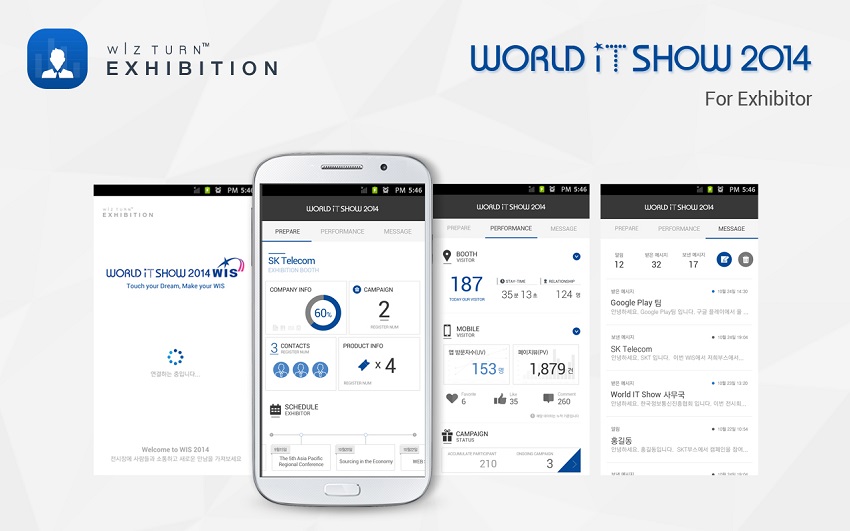 Anyone who wants to enter the venue can do so by signing up for the application through the mobile application page, instead of waiting for a long time on line in front of the exhibition site.(image: Kobizmedia/Korea Bizwire)

SEOUL, Oct. 17 (Korea Bizwire) – SK Telecom said on October 16 that it will debut a commercial service of “Wizturn Exhibition,” the Bluetooth Low Energy (BLE) beacon-based indoor navigation technology for exhibition visitors that makes it easier for them to walk around booths, for the first time at the World IT Show 2014 to be held in Busan’s BEXCO Exhibition & Convention Center.

Originally developed for the purpose of finding the misplaced smartphone inside a home, the Bluetooth beacon technology boasts higher precision than that of GPS or Wi-Fi-based positioning system. It is now often used in large indoor spaces such as trade show floors and department stores.

The company said it would install 600-plus Bluetooth beacon transmitters within the venue for the World IT Show 2014 and secure the precision rate of 5 meters or lower. According to SK Telecom, Wizturn Exhibition provides highly detailed 3D maps of the exhibition space, with convenient features such as shortest route lookup and auto information updates.

Anyone who wants to enter the venue can do so by signing up for the application through the mobile application page, instead of waiting for a long time on line in front of the exhibition site. After the visitor downloads the official “World IT Show 2014″ app with a simple registration process, the visitor’s smartphone will automatically activate its Bluetooth function and offer an optimal walking route on the 3D map.

If the user approaches a booth of her interest, the smartphone will automatically show up new product information and the brochure, as well as the contact information of the booth’s manager. The user with the app can also get information on booth events and special promotions within the radius of 10 meters through the Radar Widget Service. This service allows the user to get information without turning on the app as long as the phone device is turned on.