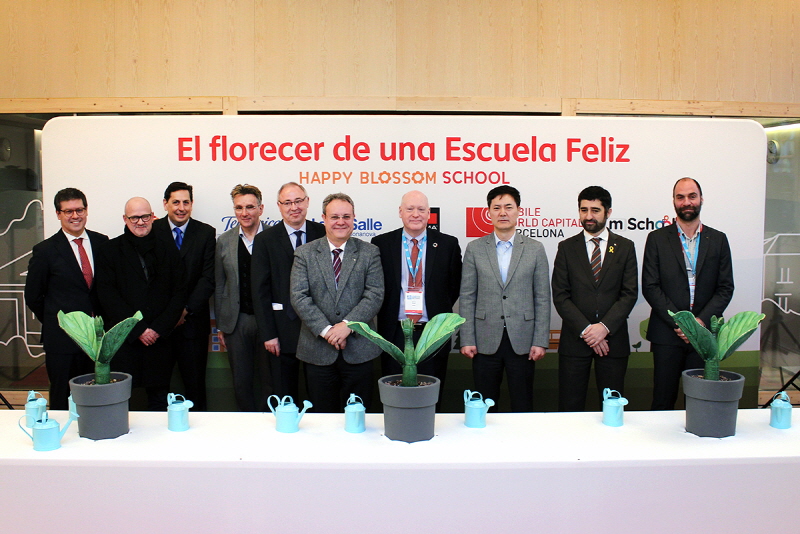 SK Telecom announced on March 1 that Smart Robot Coding School, the company’s coding education solution, will be added to the curriculum at La Salle Bonanova, an elementary school in Barcelona. (image: SK Telecom)

The company said that its Smart Robot Coding School will be added to the school curriculum at La Salle Bonanova, an elementary school in Barcelona.

Some of the company’s training contents to be launched at La Salle Bonanova are ▲”Analogue Coding Class,” a programming course that can be operated without connecting to power ▲ “Albert, the genius at math” which aims to enhance children’s capacity in mathematics ▲ “Albert, the soccer genius,” which brings sports into educational contexts. This one-year course will be provided to three classes at La Salle Bonanova.

For the training program, SK Telecom will provide smart coding robot “Albert” and educational contents in Spanish while Telefónica will offer professional coding trainers. Through “M School,” a MWC-linked program, GSMA will introduce schools participating in the pilot coding program to emphasize the importance of coding education.

The partnership between SK Telecom and GSMA was formed at last year’s “YoMo (Youth Mobile Festival),” an ICT festival focusing on inspiring youth that was held as part of the MWC 2017.

At the MWC 2017, SK Telecom operated T.um Mobile, a travelling ICT museum, to provide cutting-edge ICT courses such as smart robot coding education, VR, AR and hologram in both Spanish and English to children in Barcelona.

“In line with the United Nations Sustainable Development Goals (SDGs) of ensuring that ‘no one is left behind,’ the importance of teaching children coding skills is increasing,” said Yoon Yong-chul, Executive Vice President and head of Communication Center, SK Telecom. “Since 2014, SK Telecom has been running smart robot coding education business with Telefónica. Utilizing the know how obtained from the partnership, we could develop an experience-based program that can also benefit overseas market.”

Established in 1984, SK Telecom is the largest mobile operator in Korea by both revenue and number of subscribers. As of December 2017, the company holds around 50 percent of the market, with 30.2 million mobile subscribers including 22.87 million LTE subscribers. It has reached KRW 17.520 trillion in revenue in 2017. SK Telecom has led the advancement of mobile technologies ranging from 2G to 4G, and is currently setting important milestones in its journey to 5G. The company is not only leading innovation in the field of mobile network, but also providing IoT, media, home and platform services. SK Telecom is determined to play a significant role in the Fourth Industrial Revolution by achieving innovations and promoting shared growth with other players in the industry.