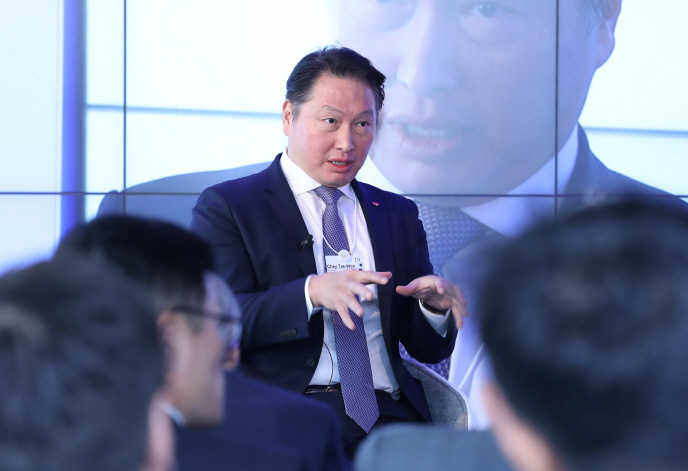 SK Group Chairman Chey Tae-won is presenting his management philosophy based on ‘social value’ as a methodology for sustainable growth in the session titled, ‘Shedding light on the hidden value of business’ held in Hotel Belvedere Grindelwald during the World Economic Forum 2019 on Jan. 24, 2019. (image: SK Group)

SEOUL, Aug. 16 (Korea Bizwire) — SK Group has decided to work with other global corporations over the next three years to build international standards to measure the ‘social value’ generated by businesses.

SK announced that the Value Balancing Alliance (VBA), a non-profit organization in Frankfurt, Germany, will begin carrying out the task of jointly developing the tools to measure social value on August 19.

The VBA was established by SK and BASF SE, a German chemical company.

While the VBA plans to invite additional companies, it will limit the maximum number of members to 15 businesses for efficiency.

The VBA aims to develop international accounting standards for social value by 2022, and recommend that businesses around the world use it through the Organization for Economic Cooperation and Development (OECD).

The OECD, the European Commission, and BlackRock Inc., the world’s largest investment corporation, will join as advisors.

A research consortium led by professors from University of Oxford and Harvard University will be organized later this year to set the theoretical foundation for the new measurement standards.

“There are several companies out there that are measuring social value, but it is almost impossible to compare them with others since all of them use different standards,” said a source from SK.

“The VBA intends to unify these standards on an international level and make an attempt to objectively measure social value.”

SK will assume the vice presidency of the VBA to lead the development process for the new standards based on its experience in measuring social value.

Last May, SK announced the results of measuring social value generated by its affiliates.