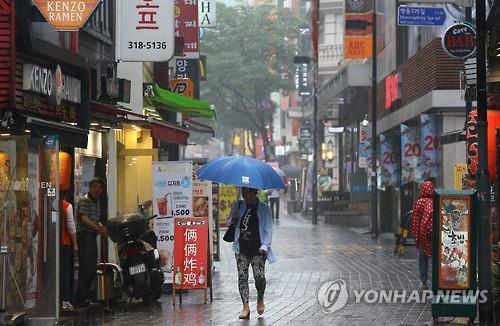 Myeongdong, a popular shopping district in downtown Seoul, is quiet as foreigners have cancelled their trips amid the outbreak of Middle East Respiratory Syndrome (MERS). (image: Yonhap)

SEOUL, June 30 (Korea Bizwire) — The South Korean tourism industry has been hit hardest by the outbreak of Middle East Respiratory Syndrome (MERS) over the past month, but the slump may continue into the summer season from mass cancellations for hotels and tour packages, a poll showed Tuesday.

The tourism and hotel industries were pummeled by the contagious virus as more than 135,000 foreigners, mostly from China, canceled their trips to Korea over the past month, according to the state-run Korea Tourism Organization. MERS has claimed the lives of 33 people here since the first case was confirmed on May 20.

According to the survey conducted on the nation’s 149 tour and hotel operators between June 17-19, the business survey index (BSI) plunged to 21 in the July-September period, slightly higher than the second quarter’s 14, which was the lowest since the survey was first conducted in 2007 by the Korea Culture & Tourism Institute (KCTI).

But the figures are still sharply lower than 53 when the country was reeling from the Sewol sinking in April last year, one of the nation’s largest maritime disasters.

A reading below 100 means pessimists outnumber optimists about business conditions down the road.

The number of inbound visitors decreased for the first time in May, and it was expected to have further dropped this month as the MERS scare escalated on a rise in the number of virus infections in early June. The number of infections, however, started to slow down last week.

A total of 1.34 million foreigners entered the nation last month, down 3.6 percent from a month ago, the Korea Immigration Service said.

Tour companies relying on inbound travelers were the most pessimistic about their businesses, and hotels and domestic tour agencies also expected reduced sales and profits during the peak summer season.

In response to the plummeting number of tourists, the government has pledged financial support for the local tourism and hospitality industries, including soft loans and tax benefits.