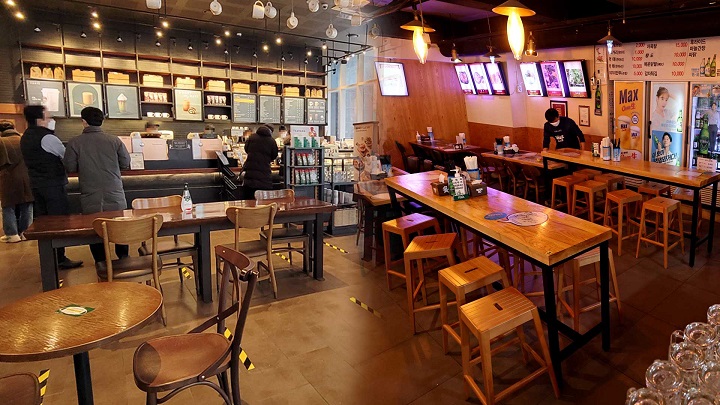 This compilation image, provided by Yonhap News TV, shows a coffee shop and a restaurant.

SEOUL, March 12 (Korea Bizwire) – Small business owners in the capital area expressed frustration Friday after the government extended coronavirus restrictions for another two weeks, saying they could hardly remember a time when business was worse.

In cities ranging from Incheon and Osan to Uijeongbu, all located in the greater Seoul area, restaurants, coffee shops and a wide array of business establishments have been subject to curfews and bans on gatherings of more than four people, among other measures aimed at stopping the spread of the virus.

On Friday, the government said it would extend the current measures for another two weeks from Monday, keeping the capital area of Seoul, Incheon and Gyeonggi Province under Level 2 and the rest of the country under Level 1.5 of a social distancing scheme and largely maintaining a nationwide ban on gatherings.

“I’ve been running a restaurant for almost 41 years, and it’s never been this hard,” the 68-year-old owner of a duck meat restaurant in Incheon, 40 kilometers west of Seoul, said.

Letting out a deep sigh, the owner recalled when business was hit hard by fears over bird flu about 10 years ago.

“Compared to now, that was nothing,” he said. “I’m just worried about when business will return to normal.”

The no-more-than-four ban, which was introduced in late December, has been the worst of the restrictions for the restaurant because many of its patrons used to come in large groups.

“Right now, sales are down 70 percent from what they used to be,” the owner said, adding that more than half of the staff have been put on leave. 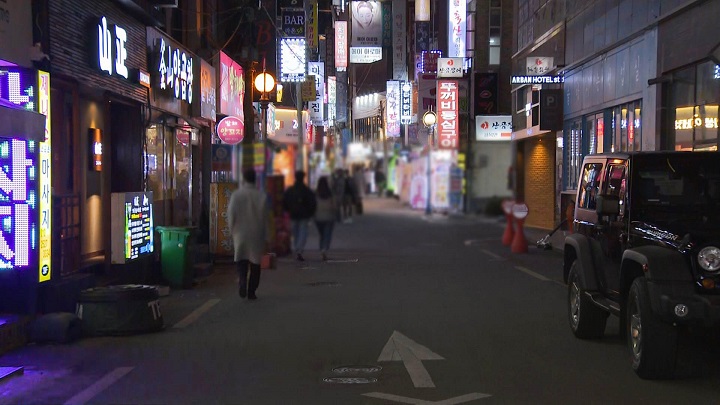 This undated file photo shows a street lined with restaurants and bars at night. (Yonhap)

The extended guidelines come as South Korea has seen its COVID-19 caseload rise by the 300s and 400s daily for the past eight weeks.

The owner of a karaoke establishment in Hwaseong, 43 km south of Seoul, conceded that keeping the restrictions may be better for business in the long run.

Like restaurants, karaoke establishments have to close at 10 p.m., which many business owners complain leaves little time for customers to sing and mingle after finishing their meals.

“I think in order to stop the spread of COVID-19, the 10 p.m. curfew is inevitable,” the 61-year-old said. “Sales have dropped significantly, but I think bringing COVID-19 under control will be more helpful for business in the long run.”

Still, others disagreed, saying there are ways to fight the virus without imposing a blanket ban on group gatherings or shuttering businesses at 10 p.m.

A 47-year-old cafe owner in Incheon suggested restricting capacity by size of the establishment, allowing one person per however many square meters is deemed appropriate, including groups.

A 61-year-old karaoke business owner in Osan, 55 km south of Seoul, said the government should allow his industry to open until midnight at least, echoing the common view among merchants that the restrictions should be tailored to each business type.

“I have to pay the full 2 million won (US$1,770) in rent, plus utilities, but because sales aren’t rising, I’ve let all my staff go and am working only with my wife,” he said.