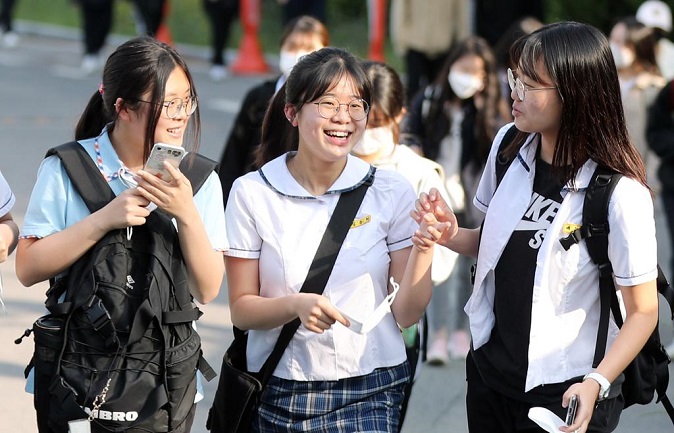 Students talk to each other without wearing face masks on their way to school in the southwestern city of Gwangju on May 2, 2022, as South Korea lifted the outdoor mask mandate starting the same day in a move to regain normalcy. (Yonhap)

Fintech firm Korea Credit Data reported that small merchants saw their average sales rise by 7.3 percent in the first week after outdoor mask rules were lifted (May 2 to 8), compared to the week before (April 25 to May 1).

Compared to last year, sales rose by a whopping 19.7 percent.

Small businesses also saw their average sales rise in the first (April 18 to 24) and second week (April 25 to May 1) after social distancing measures were lifted, rising by 13.7 percent and 16.6 percent, respectively, compared to last year.

The sales boost is largely attributed to the government’s decision to lift the outdoor mask mandate on May 2.

Nationwide population movement, a primary index for looking at changes in the country’s social and economic activity, jumped in the first week after outdoor mask rules were lifted, recovering to pre-pandemic levels.

Nationwide population movement based on cellphone usage stood at 283.25 million cases, up by 11 percent from last year, and 1.3 percent more than in 2019.