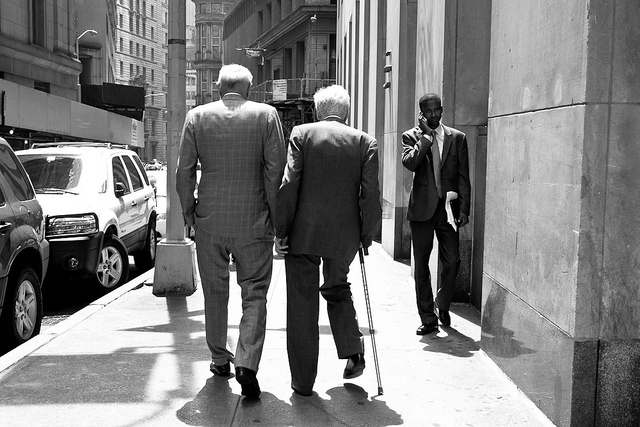 “We know that people who are more likely to fall have slower gait speeds and variable stride time, step length and step width. But it’s hard to gather that information in an everyday environment” (image: John Fraissinet/ Flickr)

WEST LAFAYETTE, Ind. June 22, 2014 (Korea Bizwire)–Researchers have shown how to modify a smartphone so that it can be used  to measure a person’s walking gait to prevent falls in people with  compromised balance, such as the elderly or those with Parkinson’s  disease.

The innovation, being commercialized as SmartGait, is designed as a tool  to aid health care officials in assessing a person’s risk of falling and  identifying ways to avoid injury.

“We know that people who are more likely to fall have slower gait speeds  and variable stride time, step length and step width. But it’s hard to  gather that information in an everyday environment,” said Shirley  Rietdyk, an associate professor in Purdue University’s Department of  Health and Kinesiology and a faculty associate with Purdue’s Center on  Aging and the Life Course.

The new system captures the gait length – the distance from the tip of  the front foot to the tip of the back foot – and the gait width, the  distance between each foot, and walking speed, said Babak  Ziaie, a professor in the School of Electrical and Computer  Engineering and Weldon School of Biomedical Engineering.

Until now, there has been no portable user-friendly system that could be  worn for a period of time to record a person’s gait, said Ziaie, who is  working on SmartGait with Rietdyk, doctoral student Albert Kim and  graduate student Junyoung (Justin) Kim.

The researchers adapted a conventional smartphone that is worn on the  waist, and the system records a person’s gait by measuring the distance  between colored “foot markers” attached to the tip of each shoe.

The researchers compared SmartGait’s performance with that of a  laboratory system that uses sensors and infrared-emitting diodes to  measure gait. Compared to this gold standard, findings indicate the  system calculates step length with an accuracy of about 95 percent. The  method was shown to have a step width accuracy of about 90 percent.

“The beauty of SmartGait is that it gives you results similar to a  system that costs several tens of thousands of dollars,” Ziaie said.  “People can wear it walking upstairs, downstairs, outside, shopping,  whatever they do during a normal day.”

A U.S. patent application has been filed through the Purdue Office of  Technology Commercialization.

People 65 and older are America’s fastest-growing population, a category  particularly at risk for falls. In 2010 about 21,700 older adults died  from unintentional fall injuries, and 2.3 million nonfatal fall injuries  among older adults were treated in emergency departments.

Among the elderly, falls are a leading cause of both fatal and nonfatal  injuries.

“I was interested in this area of research because my grandfather fell  and broke his hip, and then he succumbed to his injuries and died,”  Ziaie said. “We believe this device will be highly beneficial for  researchers and clinicians who conduct gait assessments in the field.”