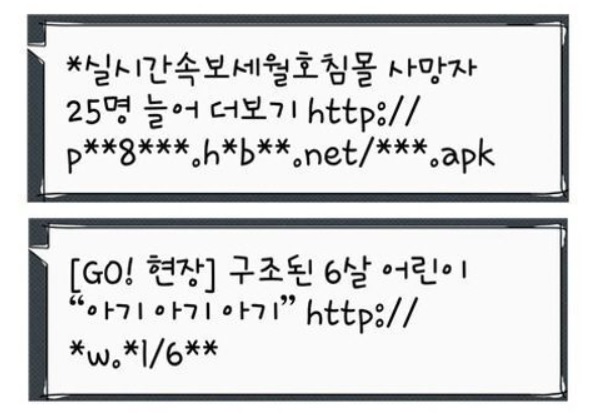 Captured image of “smishing” messages disguised as newsflashes on the boat sinking accident, which usually say “unexpected saving of the missing people on the scene” as opposed to the real fact about the accident for now.

SEOUL, Korea, April 21, 2014 (Korea Bizwire) – Cases of phone scams and smishing for text, designed to lure innocent people after the South Korea’s ferry disaster to log onto bogus news, have been rampant of late and the local authorities have come up with a series of measures to cope with the unprecedented crisis moments in South Korea’s recent memory.

On April 18, the government put out an alert that “smishing” messages disguised as newsflashes on the boat sinking accident are still being sent out and warned people be careful not to be taken in by such “triggering” messages, said the Ministry of Science, ICT, and Future Planning and the Korea Internet & Security Agency, both are responsible for the public precautionary measures online.

If the mobile phone user clicks the SMS phishing messages containing news headlines such as “New casualties from the ferry boat” or “Latest photos of 6 year old child rescued from the boat,” malicious apps (e.g., adt.apk) are instantly downloaded on the phone and steal away the phone owner’s personal information.

Kang Sung-joo, the ministry’s senior manager responsible for information strategy, said, “By taking advantage of the public’s heightened interest in the ferry boat incident, perpetrators send out these messages to prey on the unwary.” Anyone receiving text messages suspected of smishing can report it to the Korea Internet & Security Agency at the phone number 118 for detailed consultation.