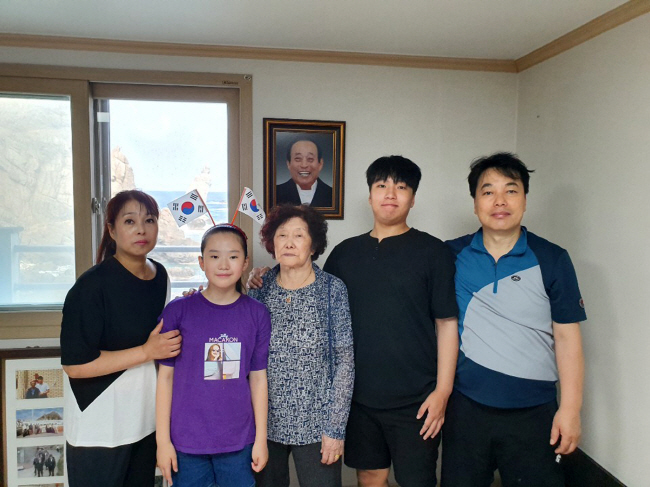 Kim Shin-yeol (C), the sole registered resident of Dokdo, poses with her family members in her home on the eastern islets on Aug. 19, 2019. (image: Ulleung County Office)

ULLEUNG, Aug. 21 (Korea Bizwire) — An elderly woman who is the sole registered resident of South Korea’s easternmost islets of Dokdo returned to her home this week after nearly two years of living on the mainland, local officials said Wednesday.

The homecoming by Kim Shin-yeol, 81, came amid a bitter feud over trade and history between South Korea and Japan. Tokyo has claimed its sovereignty over the cluster of rocks in the East Sea for decades.

Kim and her late husband began living on Dokdo in the early 1970s and formally registered their address there in 1991.

She became the islets’ sole resident when her husband, Kim Sung-do, who was called the guardian of Dokdo, died from liver cancer in October 2018 at the age of 79.

The woman, who had been staying at her eldest daughter’s home in the eastern coastal town of Uljin since November 2017, returned to Dokdo on Monday, according to the local county office on the nearby island of Ulleung.

She was accompanied by her daughter, son-in-law and two grandchildren.

She had planned to return before Aug. 15, the Liberation Day marking the end of Japan’s 36-year-old colonial rule of Korea in 1945, but had to delay the plan because of bad weather. 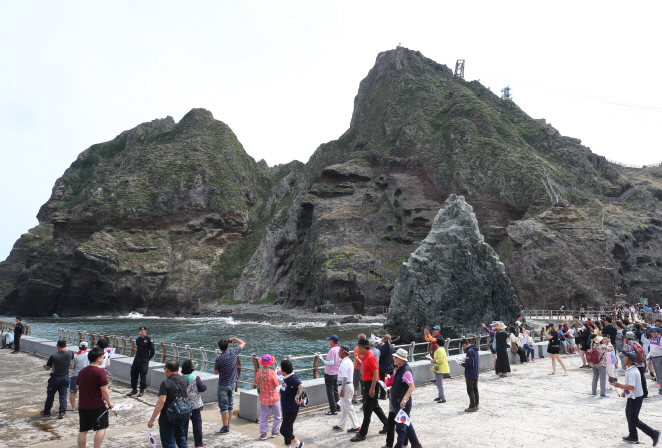 Visitors tour South Korea’s easternmost Dokdo Islets on Aug. 19, 2019, when the Dokdo tour reopened after being suspended for six days due to high waves. (Yonhap)

Relations between South Korea and Japan have worsened recently as Japan restricted its exports to the neighbor in apparent retaliation for Seoul court rulings that ordered Japanese firms to compensate Korean victims of wartime forced labor.

Earlier this month, South Korea lodged a protest over Japan’s marking of Dokdo as its territory on a map on the 2020 Tokyo Olympics website.

Kim told the Ulleung County office that she will live on the islets for a long time. Her family members who accompanied her will move out soon and other members will enter the islets, according to the office.

The county is considering naming Kim to succeed her late husband as head of village. If appointed, she will receive allowances from the county office.