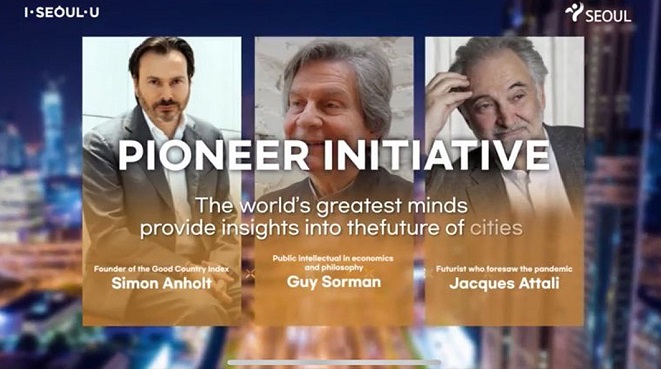 SEOUL, South Korea, Oct. 29 (Korea Bizwire) — How will the scholars around the world evaluate Seoul’s quarantine measures and ‘city brand value’ in the era of Corona Virus Disease(COVID-19)?

Civilization critic and a visiting professor from the Paris School of Political Science in France Guy Sorman, an economist, futurologist and the chairman of Planet Finance Jacques Attali, and an international marketing consultant and founder of the national brand concept Simon Anhlot said in one voice that the international community has come to recognize Seoul as a ‘safe city’ by appreciating Seoul’s ability to respond to COVID-19.

However, they suggested that Seoul should exercise necessary leadership such as COVID-19 quarantine policy in the post-COVID-19 era in order to publicize the positive image of ‘safe city Seoul’ and exert more influence.

They also emphasized that taking the lead in addressing international issues such as climate change, human trafficking, human rights abuses and environment pollution would be helpful.

The Seoul Metropolitan Government held ‘The 5th Seoul Brand Global Forum’ under the theme of ‘The Future of City Leadership in the New Global Era’ on October 28th.

The forum was held online. Professor Sorman, Chairman Attali, and Consultant Anholt attended the event and discussed about Seoul’s global leadership and vision after COVID-19.

Firstly, Professor Sorman emphasized that the concept of ‘safety’ and ‘Korean Civilization’ should be actively utilized in order to build Seoul as a global brand.

“Safety is a top priority right now. The world refers to South Korea’s COVID-19 strategy, and the concept of ‘safe city Seoul’ is a well-hidden gem. We need to make good use of the concept to announce that Seoul is safe from attacks and diseases, and an idea that ‘it is a city that people can visit anytime they want’,” he said.

Chairman Attali also praised that Seoul is one of the most important cities in the world, with its ability to respond to COVID-19. “Seoul is showing off its capabilities by dealing with COVID-19 more flexibly than any other cities in the world. Seoul has thorough sanitation and medical capabilities. The city has distributed a large amount of masks to citizens and provided COVID-19 tests to show the world’s best ability to solve the disease,” Attali said.

Attali also explained, “What I learned from COVID-19 is that a concept of a ‘good city’ is a city that prepares for the well-being of not only present, but also future citizens. This is what people call a ‘positive society’ or a ‘positive city.’”

Anholt said that if Seoul delivers its visible and creative efforts to reduce the COVID-19 impact to its citizens as well as neighboring cities, countries or the entire world, it will eventually acquire an improved national image. “If Seoul takes the lead in addressing international issues such as climate change, migration, environment pollution, human trafficking, corruption and human right abuses, the image of the country and the city will improve and it will also lead to faster economic growth.”

These photos are also available at Newscom, www.newscom.com, and via AP PhotoExpress.