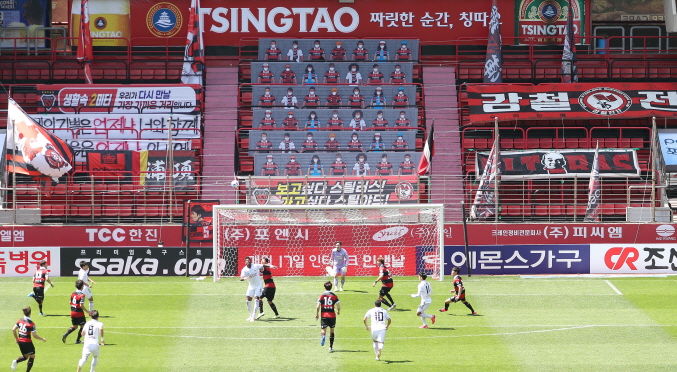 The 2020 K League 1 season opener between Pohang Steelers and Busan IPark is under way at Pohang Steel Yard in Pohang, North Gyeongsang Province on May 10, 2020. (Yonhap)

SEOUL, May 12 (Korea Bizwire) — The Korea Professional Football League (K League)’s crowdless matches, held to prevent the spread of the coronavirus, are becoming the new landscape of a common soccer game.

The 2020 K League 1 season opener between Pohang Steelers and Busan IPark, held at the Pohang Steel Yard in Pohang, North Gyeongsang Province on Sunday, was filled with voices of cheering fans throughout the whole game.

Filling an empty stadium with virtual sounds of fans is one of many ideas implemented by local football teams.

Pohang, the home team, prepared 10 sound effects including football chants, applause, boos, and groans. They played the sound effects during the opening match following a rehearsal where the players were present.

Sound effects changed depending on who was on the offensive, and for set pieces.

“Although we can’t compare with a real game, this was still good. It was better than not having any sounds at all,” said Kim Ki-dong, manager of the Pohang Steelers. 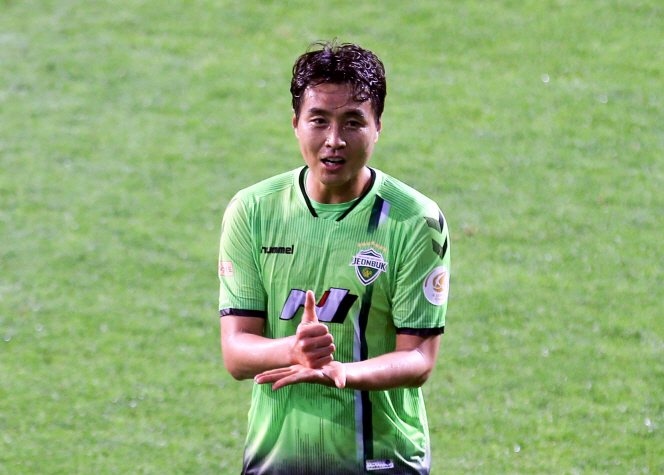 Lee Dong-gook of Jeonbuk Hyundai Motors celebrates his goal against Suwon Samsung Bluewings with a “Thank You” sign for front-line medical workers during the 2020 K League 1 season opener at Jeonju World Cup Stadium in Jeonju, 240 kilometers south of Seoul, on May 8, 2020. (Yonhap)

The “Thank You” hand sign, the right hand with the thumbs up placed on the palm of the left hand, became a popular goal ceremony as players showed their appreciation towards the medical staff fighting against the coronavirus.

Starting with Jeonbuk Hyundai Motors striker Lee Dong-gook, who scored the first goal of the season against Suwon Samsung Bluewings on Friday, the goal ceremony soon spread among many players.

Russian striker Stanislav Iljutcenko of the Pohang Steelers also made the hand sign after scoring a second goal that led to the team’s victory against Busan Ipark.

Forward Kim Seung-dae, in his first match after being transferred to Gangwon FC, followed suit after scoring a goal against FC Seoul.