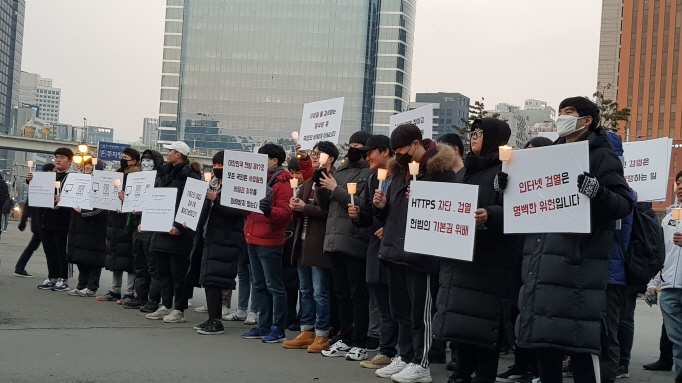 A candlelight protest was held in front of Seoul Station calling on the government to permit access to pornography. (image: Yonhap)

The decision comes in the midst of a societal crisis in South Korea in which illegal pictures of women are being distributed online.

Many are opposing the KCC initiative. Last Saturday, a candlelight protest was held in front of Seoul Station calling on the government to permit access to pornography, accusing the government of infringing upon individual freedom.

Others are doubtful that the South Korean government will ever be able to completely ban pornography, going on to argue that the actual purpose behind this whole scheme is to conduct online censoring and surveillance of individuals.

From a legal standpoint, the term ‘pornography’ is not clearly defined. Some precedents make it more ambiguous when they call pornography “placed at the borders of obscenity and art”.

The term ‘obscenity’ also varies in definition among a number of legal precedents.

There are no legal grounds to punish those watching or storing pornography in which only adults appear. (image: Korea Bizwire)

While one case would define obscenity as a stimulant for sexual desires that violates morality, another case would say that obscenity can be judged based on conventional understanding.

South Koreans are subject to heavy punishment for taking or distributing pornographic videos. The online distribution of pornography can be punished by up to 1 year of imprisonment or a fine of 10 million won (US$8,921).

Taking photographs of someone’s bodily parts without consent can result in up to 5 years of imprisonment or a 10 million won fine. Any writings or drawings that are sexually offensive can also be grounds for punishment.

However, there are no legal grounds to punish those watching or storing pornography in which only adults appear.

This is why banning access to online websites for merely watching or possessing pornography is seen by many as serious violation of individual freedom.

“Punishing adults for watching or storing pornography, based on no legal grounds, can lead to a massive social problem,” said one lawyer. “Social consent and legal standards must be set up to prevent chaos surrounding pornography.”