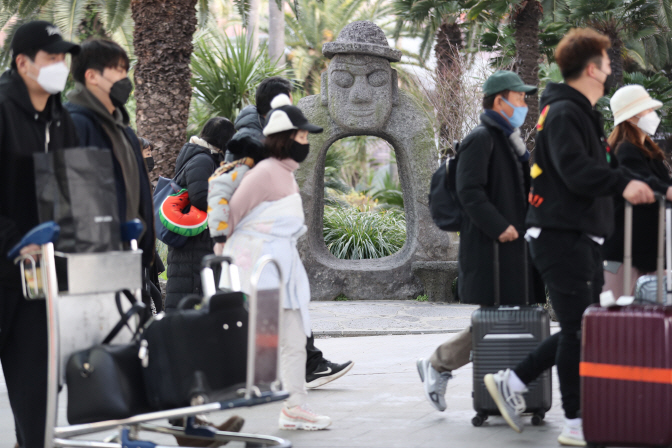 SEOUL, April 23 (Korea Bizwire) — The upcoming “golden holiday” is bringing hopes of business revival to tourist towns in South Korea, long empty for fear of COVID-19, but it is also putting authorities on high alert over the danger of a new wave of infections.

The nation is bracing for a long holiday from late this month to early May, including Buddha’s Birthday (April 30), May Day (May 1), Children’s Day (May 5) and a weekend in between.

With the infection curve flattening and social distancing rules eased, major tourist destinations and resort areas across the country are showing signs of recovery from virus-induced doldrums.

Many hotels in seaside and mountainous towns in the eastern province of Gangwon have been fully booked for the holiday season.

“We expect the reservation rate to rise to 80 percent during the golden holiday period. It is a sharp increase from last month when the figure was between 10 and 20 percent,” said an official of Paradise Hotel in the southeastern port city of Busan.

On the southern island of Jeju, some major accommodation facilities saw reservation rates spike to 70 percent.

Jeju Shinhwa World, a resort hotel in the southern island, said its booking rate was 15 percent for this week but has more than tripled for the upcoming holiday.

The Jeju Tourism Association expects the number of daily visitors to the island to increase to around 25,580 for seven days between April 29 and May 5.

The number has been 13,000 on weekdays and 16,000 on weekends since the coronavirus hit the nation in late January.

Golf courses on Jeju also expect a sharp increase in revenue, as cheap golfing tours to Southeast Asian countries have been blocked by the coronavirus outbreak.

More than 80 percent of airplane tickets between Seoul and Jeju have been sold, according to airlines. 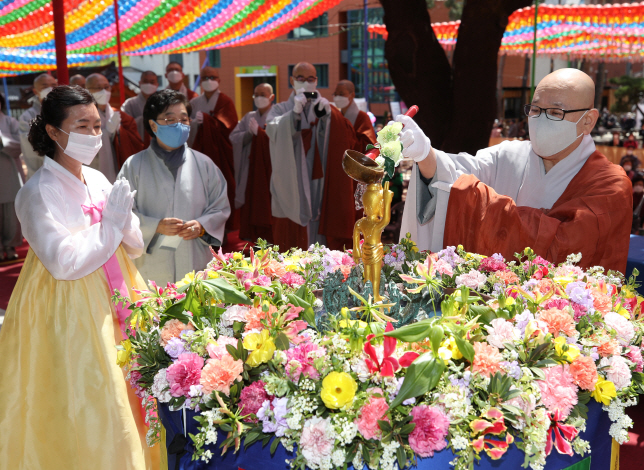 Ven. Jihyeon, chief of Jogye Temple, ladles water over a statue of the child Buddha during a ritual at the temple in Seoul on April 23, 2020, as it resumed rituals following the government’s easing of social distancing rules amid a slowdown in coronavirus infections. (Yonhap)

The long holiday is likely to be the first test of the country’s relaxed social distancing policy.

The government on Sunday extended the distancing drive until May 5, but it eased some restrictions on religious, educational and sports facilities as the number of new cases were steadily declining.

National recreational forests and arboretums across the country reopened this week and are ready to welcome visitors during the holiday.

Football and baseball stadiums run by local governments will decide soon whether to operate during the period.

“A considerable size of population movement is expected to take place during the holiday. The period is the most important time for people to practice social distancing,” Yoon Tae-ho, a senior health ministry official, said during a press briefing Wednesday.

He added the government will strengthen measures to ensure accommodations, restaurants and public facilities strictly comply with social distancing guidelines.

Local governments are ramping up measures to stem the possible spread of the virus with the influx of holidaygoers.

The Jeju provincial government plans to increase workforce and equipment to monitor arrivals at its ports. People with symptoms will be tested immediately at Jeju International Airport, officials said.

It will also continue to close 29 tourist attractions, including museums and art galleries.

“Our efforts so far in the fight against the coronavirus could be brought to naught if we let our guard down during the holiday,” an official of the provincial government.

“Because of Jeju’s nature as a tourist spot, if an infected visitor travels across the island, the spread and damage could spiral out of control,” he added.

Gangwon Province said it will continue to encourage people to wear face masks and rigorously keep a distance from one another, while doubling down the screening of visitors to forest parks and arboretums.

The central city of Boryeong, heavily dependent on tourism, also pledged to take extra steps for disinfection and social distancing.

“We are extremely glad to see tourists return to Boryeong. But as many people gather, we will maintain vigilance and thoroughly prepare (measures) against COVID-19,” said Mayor Kim Dong-il.