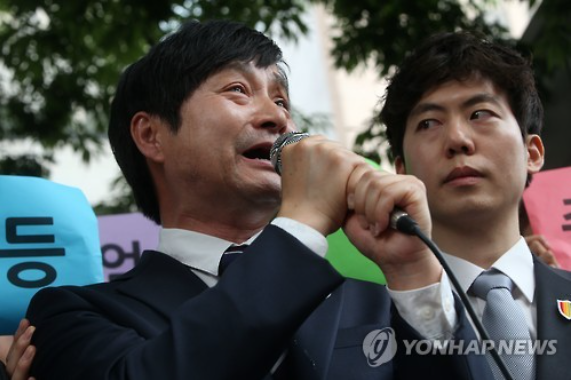 Kim Chokwangsu, a gay activist and filmmaker who also tied the knot with a male partner Kim Seung-hwan (right in the photo), is pleading for recognition of same-sex marriage in South Korea. (image courtesy of Yonhap)

SEOUL, July 6 (Korea Bizwire) – The two South Korean male filmmakers who have tied the knot in the first same-sex public wedding in South Korea asked Monday that they be recognized legally as a couple as they appeared in their first court hearing.

The hearing drew public attention as it came weeks after the U.S. Supreme Court declared the federal ban on same-sex marriage unconstitutional.

Kim Chokwangsu and Kim Seung-hwan got married in 2013 but are still seeking to get legal status as South Korea does not recognize same-sex marriages.

They submitted a report of marriage, but it was denied by the district office for “same-sex marriage does not satisfy the definition of husband and wife in civil law.” They made an appeal last May, dissatisfied with the results.

“I pleaded to the judge not to exclude our existence in court just for being homosexual,” said Kim Chokwangsu at a press conference held after the closed-door hearing.

Kim Seung-hwan said “same-sex marriage is not just about two people having sexual relation. It is also about the commitment of two people, just as our parents were to each other.”

The spokesman of Korean Network for Partnership and Marriage Rights of sexual minorities who organized the press conference said they would continue to fight for the rights of people who are lesbian, gay, bisexual or transgender if the court declares non-acceptance to the appeal.

In South Korea, homosexuality is criminalized only among soldiers, not civilians.