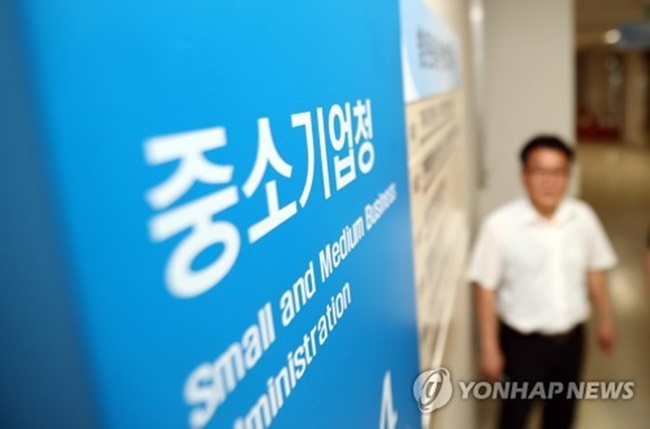 This photo, taken on July 20, 2017, shows the office of the Small and Medium Business Administration located at the government complex in Daejeon, central South Korea. (Image: Yonhap)

SEOUL, July 20 (Korea Bizwire) – South Korea will set up a new ministry in charge of small and medium-sized businesses (SMEs) that will be dedicated to supporting smaller companies and creating more jobs, the government said Thursday.

After long-drawn-out negotiations, the National Assembly passed the bill which included elevating the Small and Medium Business Administration (SMBA) to a Cabinet ministry supporting SMEs, venture startups and micro-businesses, as was pledged by President Moon Jae-in during the election campaign.

The SMBA is currently headed by a vice-minister level official.

Some of the key issues that will be tackled by the new ministry are assisting small businesses who will be hit by next year’s minimum wage hike and creating new jobs by encouraging startups.

On Saturday, the tripartite commission of the government, labor and management reached an agreement to raise the hourly minimum wage to 7,530 won (US$6.68) in 2018, up 16.4 percent from the current 6,470 won.

The president has promised to increase the minimum wage to 10,000 won per hour before his five-year term ends in May 2022.

While the decision was hailed by the labor circle and part-time workers, small business owners immediately expressed concerns, saying it will force many of them to go out of business or cut back on people they can hire.

The government is planning to inject some 3 trillion won to relieve the smaller businesses of the financial burden from the wage increase, with a task force to come up with detailed support measures to be reflected in next year’s budget proposal.

The new administration also views the SMEs and startups as a solution to resolve the country’s high youth unemployment rate.

South Korea’s jobless rate stood at 3.8 percent in June, but the unemployment rate for young people, aged between 15 and 29, was 10.1 percent.