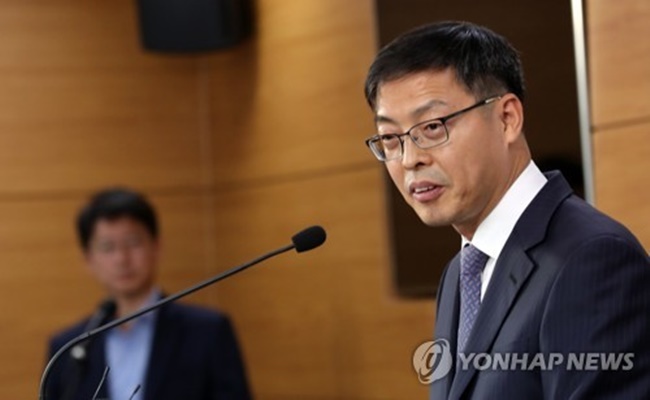 Park Byung-hong, a livestock policy official at the Ministry of Agriculture, Food and Rural Affairs, speaks in a briefing at the government complex in Sejong on Oct. 23, 2017. (Image: Yonhap)

Calls have risen to urge dog owners to constrain their pets in public spaces as a growing number of people have suffered injuries, or even lost their lives, from dog attacks in recent years.

With a revised animal protection law aimed at raising fines on owners set to take effect in March 2018, the government came up with a fresh set of measures to call for increased liabilities for dog owners following a high-profile case.

The chief of a famous Korean restaurant chain died earlier this month after being bitten inside of a Seoul apartment elevator by a French bulldog, which was later revealed to be owned by popular singer and actor Choi Si-won. The accident involving the big names made media headlines over the weekend, sparking calls for better control of potentially dangerous dogs.

“The current animal protection law doesn’t have separate punishment clauses (for dog attacks), so people have been punished for injuries or deaths resulting from negligence,” Park Byung-hong, a senior official at the Ministry of Agriculture, Food and Rural Affairs, said in a briefing. “We will consider making laws on dog-related injuries in cooperation with the National Assembly to establish a legal framework for such cases.”

The ministry will also push to raise fines for those who don’t clean up animal feces or let their dogs go unleashed in public places. First-time violators will be slapped with a 200,000 won (US$176.9) fine but this will go up to 300,000 won and 500,000 won for the second and third violations.

Currently, the enforcement ordinance levies fines of 50,000 won for a first violation, with the sum going up to 70,000 won and 100,000 won for repeated offenses.

The ministry, however, remained cautious on putting to sleep dogs involved in fatal attacks, which could draw opposition from animal rights groups.

According to the Korea Consumer Agency, a total of 1,019 dog bite accidents occurred last year, more than quadruple the 245 in 2011.