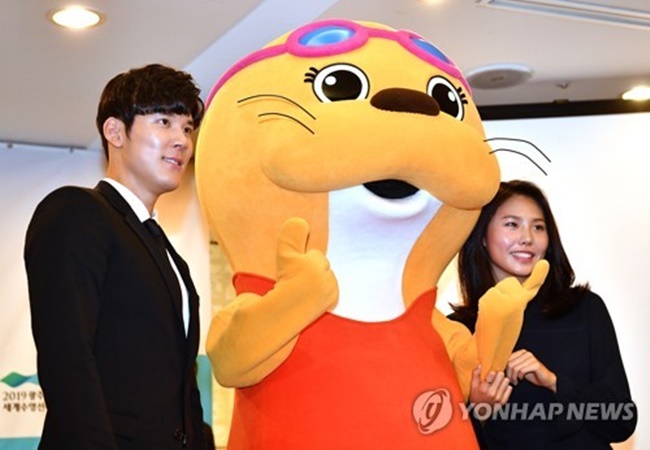 South Korean swimmers Park Tae-hwan (L) and An Se-hyeon (R) pose with a mascot for the 2019 FINA World Aquatics Championships in Gwangju after being named the competition’s honorary ambassadors in a ceremony in Seoul on Sept. 6, 2017. (Image: Yonhap)

The organizing committee for the 2019 FINA World Aquatics Championships, which take place in Gwangju, 350 kilometers south of Seoul, unveiled Park and An as their goodwill ambassadors.

Park is the only South Korean swimmer to win an Olympic medal. He captured the 400-meter freestyle gold at the 2008 Beijing Olympics and silver in the 200m freestyle. Four years later in London, Park won silver medals in the same events.

“It’s a privilege to be an honorary ambassador for the world championships held in my home country,” Park said. “I’ll try to ensure the success of this competition.”

“I’d like to thank the organizers for naming me an honorary ambassador,” An said. “I thought about what I could do to promote this event, and I think my job is to continue to do well in all competitions.”

The 2019 FINA world championships will take place from July 12 to 28. It will be the first time the event will have taken place in South Korea.