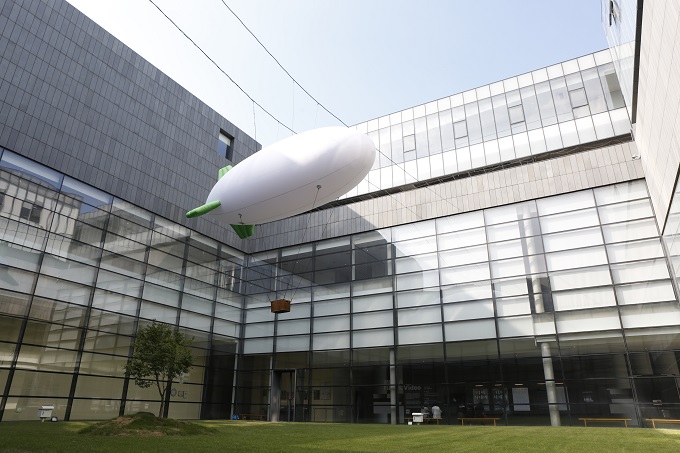 This photo, provided by the National Museum of Modern and Contemporary Art (MMCA), shows a photo taken during the exhibition “Soungui Kim: Lazy Clouds” at MMCA in Seoul. The work is scheduled to be showcased at the ZKM Center for Art and Media in Karlsruhe, Germany.

SEOUL, Oct. 20 (Korea Bizwire) — South Korea’s national museum of modern and contemporary art on Tuesday announced plans to hold exchange exhibitions with key art museums and galleries around the world over the next two years.

Under the plan, the National Museum of Modern and Contemporary Art (MMCA) will be opening exhibitions at the Solomon R. Guggenheim Museum and the Los Angeles County Museum of Art (LACMA) in the United States, the National Art Museum of China and the ZKM Center for Art and Media in Germany in 2021 and 2022.

A relay exhibition highlighting South Korea’s experimental art scene in the 1960s and 70s will take place at MMCA and the Guggenheim in 2022, while an exhibition on modern Korean arts is scheduled for the fall of 2022 at LACMA.

MMCA said it plans to hold an exchange exhibition and academic symposium with its Chinese counterpart in 2022 to mark the 30th anniversary of diplomatic ties between Seoul and Beijing.

The scheduled exhibitions are the latest in the art museum’s move to promote Korean arts abroad. Most recently, MMCA held a retrospective of South Korean artist Yun Hyong-keun at Palazzo Fortuny in Venice in 2019.