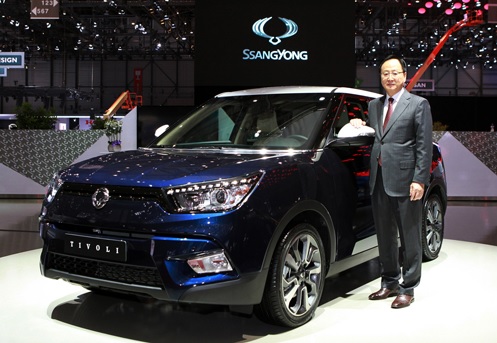 With the global launch, the automaker seeks to target the fast-growing market in Europe where sales of compact SUVs are expanding at a double-digit pace. (image: Ssangyong Motor)

SEOUL, March 3 (Korea Bizwire) — Ssangyong Motor, South Korea’s smallest carmaker, said Tuesday that it has unveiled its Tivoli small sport utility vehicle (SUV) on the global stage as part of efforts to strengthen its foothold in the fast-growing SUV market in Europe.

Ssangyong Motor said it is showcasing the Tivoli along with its environmentally friendly concept Tivoli EVR and other key SUV models at the Geneva motor show that will be held until March 15.

With the global launch, the automaker seeks to target the fast-growing market in Europe where sales of compact SUVs are expanding at a double-digit pace. The automaker, known for SUV models, aims to sell 17,000 vehicles in Europe this year, over 60 percent more than last year.

“The Tivoli is a key model in our push for a business turnaround and long-term strategy,” Ssangyong Motor CEO Lee Yoo-il was quoted as telling reporters during the motor show.

“Given that it has reflected the tastes of European customers from its development phase, we expect that the Tivoli could meet diverse demand ranging from style, safety to convenience,” he added.

The Tivoli, launched here in South Korea in January, has been a huge success, appealing to younger people with its design, roomy cargo space and relatively cheap price that ranges from 16.35 million won (US$14,800) to 23.47 million won. More than 10,000 units of the Tivoli have been sold here.

The Tivoli has received much media and customer attention as Mahindra & Mahindra Group’s chairman said its success and Ssangyong Motor’s business turnaround could lead to the re-hiring of the workers who were laid off when the company was put under court receivership in 2009.

On Monday, Ssangyong said its exports in February more than halved from a year earlier as it had to cut back on sales in Russia hard-hit by economic instability. However, it expects sales will recover once the company starts full-swing sales of the Tivoli in the global market.