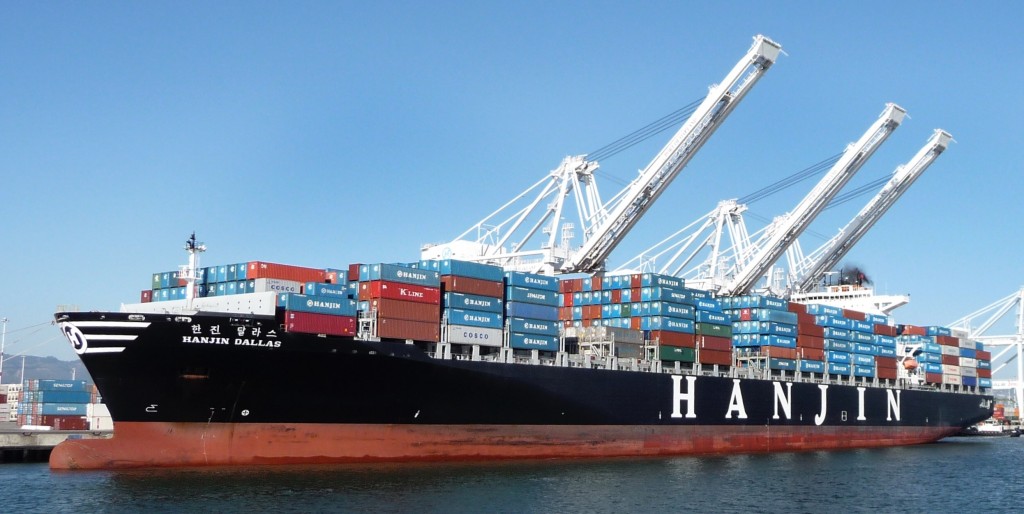 “Joining the shipping alliance is the only critical way for us to deal with the global downturn,” said an official from Hanjin Shipping. (image: Wikipedia)

The shippers have been suffering from ballooning debts and mounting losses due mainly to a worldwide slump in the industry.

Hanjin Shipping has been under voluntary debt restructuring with creditors, and its owner family decided to give up control of the company.

Meanwhile, the protracted slump also dealt a blow to the global shipping industry, which responded by reorganizing its alliances into two big groups — the 2M alliance, led by the industry leader Maersk of Denmark, and the Ocean Three, piloted by France’s CMA CGM.

Hanjin Shipping, as well as Hyundai Merchant Marine, seemed to have been sidelined from such movements, raising concerns that they will not survive competition in the future as a couple of leading alliances dominate the entire shipping industry by sharing ships, networks and port calls.

Hanjin Shipping said it has reached an agreement to set up a new alliance named The Alliance along with five shippers including Germany’s Hapag-Lloyd, Japan’s NYK and Taiwan’s Yang Ming.

The new group will have a network of 620 vessels, with 3.5 million TEUs, or 20-foot equivalent units, accounting for some 17 percent of market share.

The member companies will start operations from April 2017 to cover east–west trade lanes, according to the South Korean company.

“Joining the shipping alliance is the only critical way for us to deal with the global downturn,” said an official from Hanjin Shipping. “We expect it will help us make a turnaround.”

The state-run Korea Development Bank, the main creditor of Hyundai Merchant, said it will continue to extend support for the normalization of the ailing shipper, regardless of its inclusion into a global shipping alliance.

“Hyundai Merchant failed to join a global alliance because of the possibility of its court receivership in case its ongoing self-rehabilitation drive ends in failure,” said a KDB official.