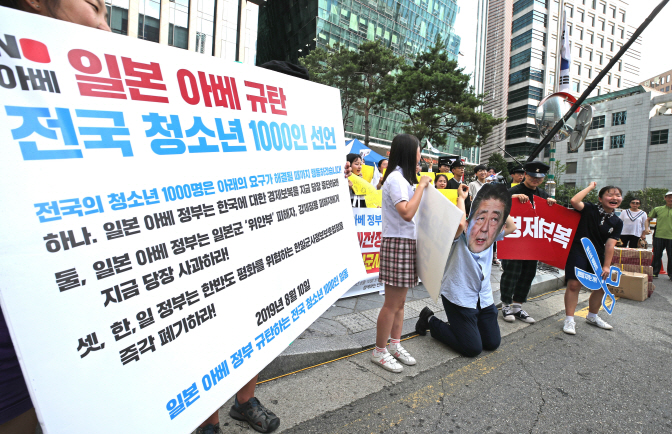 Students give a performance blasting Japanese Prime Minister Shinzo Abe in front of the Japanese Embassy in Seoul on Aug. 10, 2019. (Yonhap)

SEOUL, Aug. 11 (Korea Bizwire) — Hundreds of protesters, including teenage students, held a protest in Seoul on Saturday criticizing Japanese Prime Minister Shinzo Abe for an “economic war” against South Korea and calling for Seoul’s withdrawal from a military information-sharing pact with Japan.

Despite sweltering heat, the demonstrators gathered in front of the Japanese embassy in Seoul and issued a declaration condemning the Abe government for its recent export restrictions on South Korea and demanding its sincere apology for wartime atrocities.

The declaration was signed by 1,000 students, according to its organizers.

Japan, which tightened exports of key materials to South Korea on July 4 in apparent retaliation over Supreme Court decisions here on compensation for wartime forced labor, decided to remove Seoul from a list of trusted export destinations last week.

“Let alone making sincere apologies and self-reflection for its brutalities during colonial rule, the Abe government has waged an economic war by continuing export restrictions on South Korea,” the statement said, calling on Japan to immediately stop such measures.

They also raised their voice against the Seoul-Tokyo military information-sharing deal, or the General Security of Military Information Agreement (GSOMIA), calling it “a humiliating pact” that allows the expansion of Japan’s military influence on the Korean Peninsula.

Following Japan’s export curbs, South Korea has hinted at the possibility of scrapping the 2016 agreement, which is aimed at better coping with threats from North Korea.

The pact has been automatically renewed each year in August.

It will expire in November, however, if either party notifies the other of its intention to scrap it 90 days in advance. This year’s notification deadline is Aug. 24.

After delivering the statement to the Japanese embassy, the protesters gave performances castigating Abe and marched down the streets in Seoul holding placards reading “No Abe.”

The rally continued into the night with a candlelight vigil.