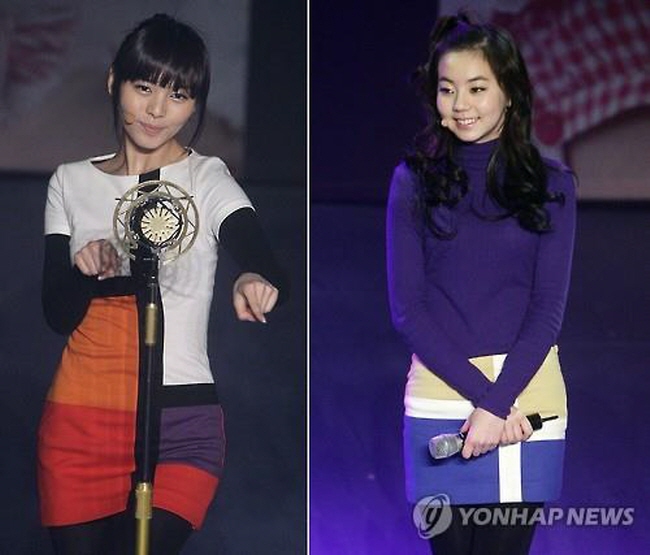 JYP Entertainment announces on July 20, 2015, the withdrawal of Sunye (L) and Sohee (R) from the girl group Wonder Girls. (Yonhap)

JYP Entertainment said Sunye, the lead vocalist, has decided to focus on her new family after marrying a missionary in January 2013. She gave birth to a baby girl in October of that year.

“I have nothing but gratitude after eight years with my fans,” Sunye wrote in a letter posted on Wonder Girl’s online fan community WonderFul. “I apologize for not living up to my position as a lead vocalist. From here on out, I’d like to live my life to its fullest as a mother and a wife.”

The 23-year-old Sohee moved to BH Entertainment in December 2013, but her withdrawal from the group became official Monday. She cited her passion to become a full-time actress.

“I gave this choice a lot of thought and talked it through with other members,” she also wrote in a letter posted on the community. “I decided it would hurt the Wonder Girls for me to dabble in both singing and acting. From now on, I want to root for Wonder Girls as a fan.”

JYP had already said the two would not be part of the group when it releases a new album in August.

Instead, Sunmi, who left the group in 2010, will rejoin to create a whole new, four-member Wonder Girls, it said.

The group debuted in 2007 but has suspended its activities since the second EP album “Wonder Party” in June 2012 because of Sunye’s marriage and Sohee’s agency transfer.’