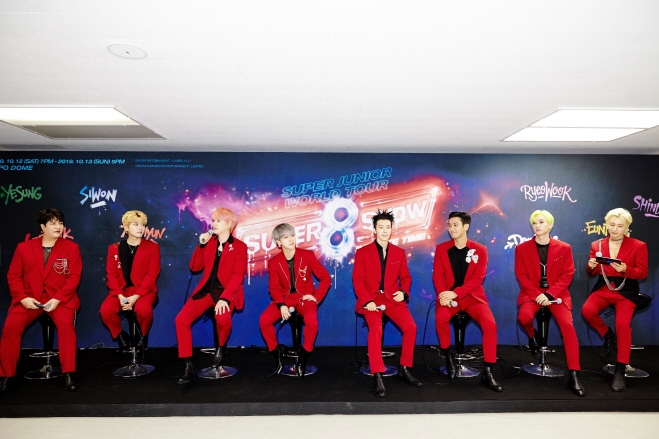 K-pop boy band Super Junior poses for a photo during a showcase for the group’s ninth album, “Time_Slip,” at a stadium in Seoul on Oct. 13, 2019. (image: Label SJ)

Tokyo has announced that travelers coming from South Korea and China will be asked to stay at designated facilities for two weeks from Monday through the end of this month on coronavirus infection concerns.

The country also plans to suspend a 90-day visa-free entry program for South Koreans next week.

“Because of the entry restrictions announced by the Japanese government yesterday, Super Junior’s concerts were postponed,” the band announced on its official Japanese homepage earlier in the day.

The announcement did not provide information about when the Japanese concerts will be held again, saying it will come up with details about ticket refunds in the near future.

The Japanese immigration measures are scheduled to be effective till the end of this month for now, but other K-pop events in Japan could fall under the influence of the entry restrictions as uncertainties remain.

K-pop girl band TWICE is slated to give two days of concerts at Tokyo Dome from April 15-16, and KCON, a major K-pop festival by CJ ENM, is to hit the Makuhari Messe convention center in the Japanese city of Chiba from April 3-5.

The organizers of the two events said they are closely monitoring the situation.