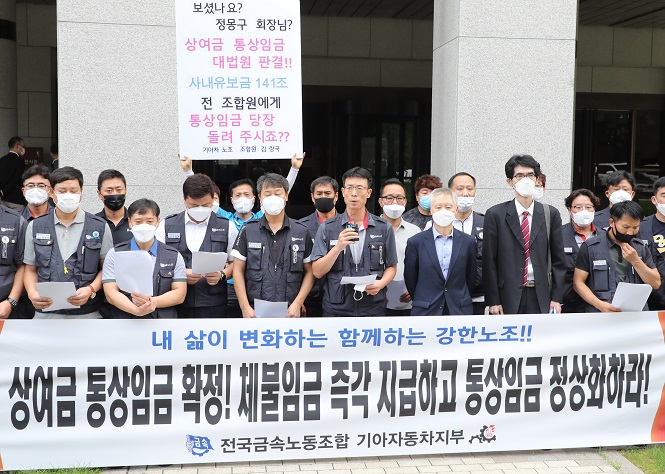 Workers of Kia Motors Corp. hold a press conference in front of the Supreme Court in Seoul on Aug. 20, 2020. (Yonhap)

SEOUL, Aug. 20 (Korea Bizwire) — The Supreme Court on Thursday upheld a lower court’s ruling in favor of workers at Kia Motors Corp. that fixed bonuses should be counted as standard wages, closing the curtain on the almost decadelong legal battle.

The Supreme Court confirmed that the automaker should pay its workers back wages, based on a calculation that counts regular bonuses as “ordinary wages.”

It agreed with the lower court’s conclusion that recess should be counted as working hours, and that working on Saturdays should be compensated based on the holiday pay system.

The court also dismissed the claim by the carmaker that the unionized workers violated “the principle of good faith” by suing the company knowing that it would damage the company’s financial status.

The principle is a civil law term meaning that one must not ask for something from the other party when it infringes on the rights of the counterpart.

The top court reached the same conclusion as the lower court did that the expected financial cost was not significant enough to cause a great financial strain on the carmaker.

Kia said it had no comment on the court’s ruling.

Workers have been sensitive to the issue as ordinary wages are used as the standard for gauging overtime, severance and other allowances.

Some 27,000 workers filed the suit in October 2011, demanding the company recognize regular bonuses, meal allowances and daily expenses as part of the ordinary wages.

A local court ruled in favor of the workers in 2017, saying regular bonuses, meal allowances and daily expenses should be included in the scope of ordinary wages.

The Seoul High Court also sided with the unionists of the country’s second-biggest carmaker two years later, but it slightly reduced the amount of back payments by excluding some meal and family allowances initially included in the lower court’s definition of the base payment.

The court told the company to pay its workers 422.3 billion won (US$355 million) in unpaid wages and interest.

With the highest court’s ruling, the company should pay some 50 billion won to approximately 3,000 unionized workers in additional back pay.

For the two previous lawsuits against the company, about 27,000 workers participated, but many dropped out after the 2017 decision, which led to an agreement between the company and the union in March 2019 on an additional pay raise of 19 million won on average.

From January to June, Kia’s net profit plunged 66 percent to 392.28 billion won from 1.15 trillion won in the year-ago period amid the new coronavirus pandemic.