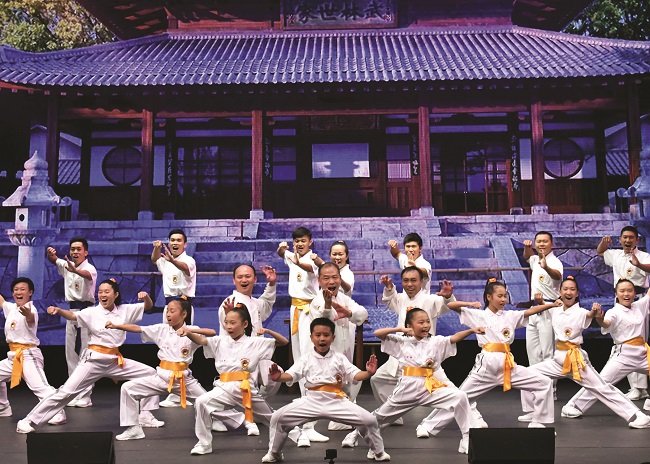 LOS ANGELES, Sept. 28 (Korea Bizwire) – Tai Ji Men Qigong Academy in Los Angeles celebrated its 21st birthday on September 26, 2021. Because the Delta variant of COVID-19 is rapidly spreading, the anniversary celebration was conducted virtually, and everyone was invited to participate in the wonderful event by watching it online.

For the past 21 years, under the leadership of Dr. Hong, Tao-Tze, the Academy has held various life wisdom and health symposiums as well as cultural exchange activities, and it has engaged in numerous international events to promote a culture of conscience, love, and peace, with the goal of improving global citizens’ physical, mental, and spiritual health. In recent years, Tai Ji Men has been promoting the “Movement of An Era of Conscience“ and the “International Day of Conscience” to awaken the conscience in the people of the world. During the SARS outbreak in 2002 and during the COVID-19 pandemic, which started in the end of 2019, Tai Ji Men produced videos featuring epidemic prevention guidelines, including Three Don’ts, Five Do’s, and Six Tips as well as a trilogy on COVID-19 prevention measures: Antiviral Combat, The War Against Virus, and Anti Pandemic Battle. It has been sharing these videos with global citizens, hoping that everyone will stay safe, healthy, and happy and that the pandemic will end soon.

Many community leaders offered certificates of recognition or delivered congratulatory video messages in honor of the Academy’s 21st anniversary, acknowledging the contributions of the leader and members of Tai Ji Men for the community, the United States, and the world as Tai Ji Men has been widely promoting the culture of qigong and martial arts as well as a culture of love, peace, and conscience.

U.S. Congresswoman Young Kim said, “For 21 years, Tai Ji Men Qigong Academy has served as a home and a center for self-improvement for many of our community members through martial arts and qigong. I want to thank you for fostering our future leaders, physically, mentally and spiritually.”

California State Senator Josh Newman presented a California Senate Certificate of Recognition to the Academy and stated in his video message, “Despite the pandemic, your academy has continued to thrive, serving as a vital pillar to our community by reaffirming the spirit of universal brotherhood, etiquette, and conscience during a time when such an example is vitally needed across our state and across our country as a whole.”

California Assemblyman Phillip Chen said, “I really appreciate all they’ve done for our community and also for the state of California,” commending Tai Ji Men for improving people’s wellness and health through martial arts and qigong. He also honored Tai Ji Men Qigong Academy and Dr. Hong, Tao-Tze with a California Legislature Assembly Resolution respectively in recognition of their contributions.

Diamond Bar City Council Member Andrew Chou said that the pandemic has been hard on everybody and that Tai Ji Men’s work is very important in maintaining people’s physical and mental health. “I understand that throughout the pandemic, you have been actively hosting virtual events both locally and internationally. And also throughout social media, you have continued to share preventive measures to overcome anxiety and stress caused by the pandemic. So thank you again for all you do and congratulations on your 21st anniversary,” he added.

Walnut Valley Unified School District Board President Layla Abou-Taleb said, “I want to congratulate the Tai Ji Men Qigong Academy for 21 years of service to the community. You play an important role and we really, truly appreciate it and wishing you a better year, this coming year for all our students and our community.”

Jason Wang, a Tai Ji Men member who immigrated to the U.S. with his parents 20 years ago and grew up with the Tai Ji Men Qigong Academy in Los Angeles, had a lot to say about the Academy’s 21st birthday. Since he is 6-foot-3 and in good shape, it’s difficult to imagine that he had serious health issues as a child and had to go to the doctor frequently for asthma and allergies. He said, “There was one time I was jumping on a bed with my cousin, and I ended up having to go to the hospital because of the asthma attack.” “After joining Tai Ji Men, my health has improved tremendously. I no longer was getting any asthma attack,” he said. Last year, he was blessed with a new baby. He was already very busy with his work, and the new addition to his family made him even busier. He gained a better understanding of the reminder from his Shifu (master) at Tai Ji Men: “Those who use their time wisely can find time to accomplish a lot.” He has learned to manage his time well so that he can balance life and work. He also learned to think positively. He shared a piece of advice from his master by saying, “You can live a day happy, or you can live a day sad or angry. So why would you want to live your day in anger or in sadness?” Jason said that practicing Tai Ji Men Qigong helps him replenish his energy, and he expressed his gratitude for Dr. Hong: “Shifu has taught me a lot. So from his teaching, I’m able to utilize that in my personal life and my work life. And he has just helped me become a better person.”

Munni Irone, founder of the Art 4 Peace Awards, met Tai Ji Men members at an international conference many years ago and decided to join to practice qigong and cultivate her heart. She shared some of the benefits of practicing Tai Ji Men Qigong: “It kept me very centered. It kept me from having stress. I work long hours without any stress because it allows me to do that. Tai Ji Men Qigong has numerous different benefits, not only just health benefits. There is a social benefit, emotional, and spiritual benefit.” She continued by saying, “Your skin is better. You have more energy. You are also very successful in business because people trust someone that has good energy. So you create your Qi; you create your energy to be successful.” She said that she used to suffer from back problems, but that she is now in much better shape. She said, “Shifu is a very kind and very influential and compassionate human being, who is also helpful in creating this beautiful family of love and peace.” “In Tai Ji Men you can be in any faith and religion. It really doesn’t matter because this is something on a different level for mental, spiritual, and physical spirituality, so I’m very blessed to be part of this beautiful family. I’m very thankful for Dr. Hong, for creating this wonderful family where you can center so many people,” she added.

Tai Ji Men invites everyone to read the uplifting stories of Tai Ji Men members from all walks of life on its website at www.taijimen.org, to replenish positive energy. Tai Ji Men encourages people to listen to their conscience, think positively, do good deeds, and collaborate to bring the pandemic to an end as soon as possible!

Tai Ji Men Qigong Academy: Tai Ji Men is an ancient menpai (similar to school) of qigong, martial arts, and self-cultivation. It has carried forward the wisdom of Daoist philosophy, one of the highest philosophies of humankind. It is an international nonprofit cultural organization. Its contemporary zhang-men-ren (grandmaster), Dr. Hong, Tao-Tze established the Tai Ji Men Qigong Academy in 1966, and since then it has grown to 15 academies worldwide. In 2016, it commemorated its 50th anniversary, a major milestone in its history, with big celebrations and spectacular cultural performances in Los Angeles, San Francisco, and Taiwan.

A photo accompanying this announcement is available at https://www.globenewswire.com/NewsRoom/AttachmentNg/3ff274db-6012-4b58-bf66-64d620ced1fc