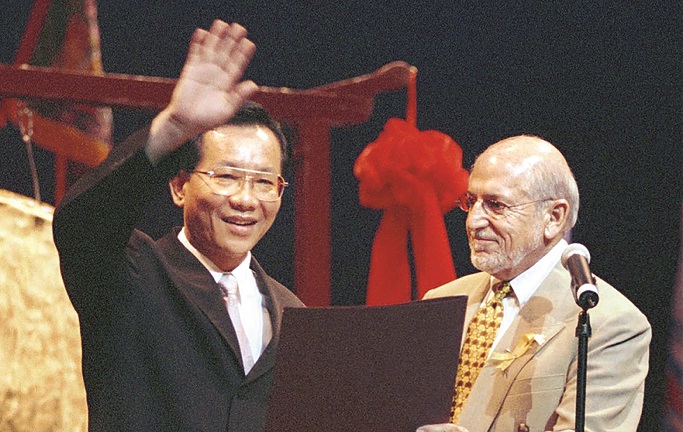 Dr. Hong, Tao-Tze, the leader of Tai Ji Men, is presented with a proclamation by the representative of Mayor Jeremy Harris of Honolulu in 2001, declaring September 16, 2001 as Tai Ji Men Qigong Academy and Dr. Hong Tao Tze Day in Honolulu.

HONOLULU, Sept. 17 (Korea Bizwire) — To honor the 20th anniversary of the 9/11 attacks, various commemorative events took place around the United States. Twenty-three Tai Ji Men members visited Honolulu, Hawaii on September 3-5 to reflect on the historic day and the importance of peace. They also celebrated September 15 as International Love and Peace Day, as well as the 20th anniversary of the Tai Ji Men Qigong Academy and Dr. Hong Tao Tze Day in Honolulu. The group visited different locations to promote the idea of conscience, love, and peace, including Honolulu City Hall, Taipei Economic and Cultural Office in Honolulu, Honolulu’s Chinatown, Diamond Head, Dole Plantation, the National Memorial Cemetery of the Pacific, Waikiki Beach, and Pearl Harbor.

Dr. Hong, Tao-Tze, the leader of Tai Ji Men, Mrs. Hong, and Tai Ji Men members were invited to the 54th Annual DPI/NGO Conference in September 2001, and they witnessed the 9/11 terrorist attacks. During those difficult times, Tai Ji Men hosted ceremonies of ringing the Bell of World Peace and Love in New York and Honolulu to soothe people’s hearts and pray for the United States and the world, and visionary leaders from all walks of life were invited to ring the Bell and make peace wishes.

At that time, New York was in chaos, and the world was under the threat of more terrorist attacks. The iconic World War II port of Pearl Harbor in Hawaii was projected to be the next target, and many people sought to evacuate the country. Tai Ji Men had been invited to participate in the Aloha Parade before the 9/11 attacks. Dr. Hong, Mrs. Hong, and the Tai Ji Men members, as martial artists, were adamant that they would fly to Hawaii as promised, despite all odds. Due to numerous flight cancellations, the group waited at the airport every day until they were eventually able to go to Hawaii on the 15th and 16th on separate flights. Despite the cancellation of the Parade, the delegation still held “A Night of Ancient Culture,” a cultural feast and an ancient bell ringing ceremony to pray for Hawaii, the U.S. and the world, in Hawaii Theatre Center on September 16.

430 Tai Ji Men members were supposed to participate in the parade, but only 36 were able to make it to Hawaii to perform at the theater. Their sincere, peaceful, and righteous performances brought nearly 1,000 people to tears. Jennifer Hung, a Tai Ji Men member who returned to Hawaii 20 years later, recalled, “When everyone closed their eyes, they silently and sincerely prayed that there would be no more terrorist attacks, that the living would be comforted, and that the souls of the departed would rest in peace. At the end of the event, many people were very touched and praised us for being fearless and selfless.”

During the bell ringing ceremony on September 16, 2001, Dr. Hong explained the significance of the ceremony: “The peaceful sound of the Bell brings the blessing of peace and stability. All living creatures in the world are our brothers and sisters. It is with a heavy heart that we pay tribute to the victims of September 11. Global solidarity and cooperation are an urgent imperative, and with sincere care from the heart, we can resolve the sorrow of the world and reignite the hope of life.” Dr. Hong expressed his prayers for the 9/11 attacks: “May the souls of the deceased rest in peace, and I lead my disciples to pray with the world with a sincere heart and the mighty righteous energy from the auspicious formation. Let us resolve hatred and conflict with love.” Representatives from many faiths and walks of life were invited to join in praying for Hawaii, the United States, and the world.

The then Mayor of Honolulu Jeremy Harris expressed his appreciation to Tai Ji Men’s contributions to world peace and praised Dr. Hong, Tao-Tze for being “an outstanding leader who imparts the philosophy of yin and yang, and advocates the concept of physical, spiritual and mental health.” Mayor Harris also commended the Cultural Goodwill Group organized by Dr. Hong for strengthening relationships among countries and cultures through cultural exchange. He proclaimed September 16, 2001 as Tai Ji Men Qigong Academy and Dr. Hong Tao Tze Day in the City and County of Honolulu.

Tai Ji Men’s leader and members consoled people’s hearts with cultural performances full of love and peace in the aftermath of the terrorist atrocities. Twenty years later, Tai Ji Men members returned to Hawaii, and now the world is facing the impact of the pandemic, natural disasters and war. With the conviction that conscience is the wellspring of love, they promoted the International Day of Conscience in Honolulu and emphasized that conscience leads to good governance, and with conscience-driven politics, people will be blessed. They sang peaceful songs in various tourist attractions, hoping that global citizens will work together to overcome the pandemic with conscience.

“When we sing, we think of true love and peace for everyone,” said Tai Ji Men member Nunu Tun, adding, “We hope that everyone can return to the origin, which is a peaceful world. We are bringing the energy of love and peace to every corner of Honolulu again by singing songs like ‘Love and Peace Song,’ ‘Love of the World,’ and ‘Love.’”

“Twenty years ago, my parents were members of a cultural goodwill group that was to visit Honolulu for cultural exchange, but they couldn’t make it because of the 9/11 attacks,” recalled Alan Shih. “It’s a huge pity. I am delighted to be in Honolulu today, and I bring the best wishes of my parents and all of my Tai Ji Men brothers and sisters to this city. I pray that the world will be filled with love and peace, that everyone will act with conscience, and that every family will be happy.”

Another Tai Ji Men member Ying-fen Chang said, “We also went to Hawaii with the goal of drawing international attention to the significance of protecting religious freedom and human rights. The sacred land of Tai Ji Men was illegally auctioned and forcibly confiscated by the Taiwanese government on August 21, 2020, severely violating Tai Ji Men members’ freedom of belief and right to select their own path of self-cultivation. This has become a shocking case of human rights violations in the world.”

The ECOSOC-accredited NGO CAP-LC (Coordination des Associations et des Particuliers pour la Liberté de Conscience) submitted a written statement about the Tai Ji Men case and other unjust cases to the United Nations’ Human Rights Council, indicating that in various countries, taxation has been used as a weapon to discriminate against religious and spiritual minorities.

On September 3, members of Tai Ji Men and the Action Alliance to Redress 1219 protested in front of the Taipei Economic and Cultural Office in Honolulu, delivering a petition letter to Tseng Yong-Kwang, the Office’s director-general, asking him to send their message to Taiwanese President Tsai Ing-wen. They were received by Director Joffrey Han of the Office, on his behalf. Tai Ji Men members urged President Tsai to lead her administration to truly rectify the Tai Ji Men case, revoke the unlawful 1992 tax bill, and return the illegally confiscated land to Tai Ji Men as soon as possible. Director Han stated that he would inform the director-general of their message.

On September 4 and 5, members of Tai Ji Men and the Action Alliance to Redress 1219 continued to hold signs at various Honolulu attractions to protest the nearly quarter-century-long persecution of Tai Ji Men by a few Taiwanese rogue bureaucrats, and many Honolulu residents expressed their support for the protest and wished for a speedy resolution of the Tai Ji Men case. Tai Ji Men members sincerely hope that everyone’s conscience will be awakened, that no more cases of injustice will occur, and that the world will be filled with love and peace!

A photo accompanying this announcement is available at https://www.globenewswire.com/NewsRoom/AttachmentNg/31e48365-ac67-48ae-a982-ff9b6e02465d