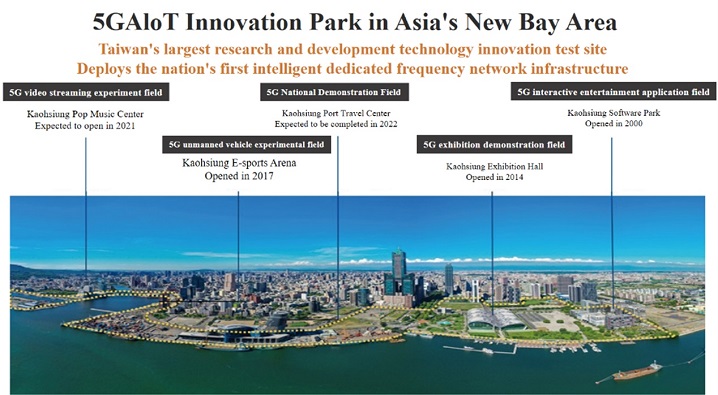 KAOHSIUNG, TAIWAN, Dec. 17 (Korea Bizwire) — After the global outbreak of the pandemic, there’re not only changes in our daily life, but also major changes in urban transformation.

Taiwan’s economic growth rate (year on year, yoy) in 2020 is 2.98%, and it is the best performer among the developed countries in the world. Kaohsiung is also well equipped with water, electricity, land, human resources and other resources, attracting well-known domestic and foreign manufacturers to make investments. Since last year, the cumulative amount of investment in Kaohsiung has reached 159.4 billion. The next two major directions of Kaohsiung’s investment and city development are: The 5G AIoT Innovation Park in Asia’s New Bay Area, which is about to involve investment of tens of billions of dollars, and the high-end manufacturing centers and semiconductor clusters to be formed in the Qiaotou Science Park and Renwu Industrial Park.

Kaohsiung has officially launched the “Asia New Bay Area 5G AIoT Innovation Park” this year. It will invest a total of 11 billion in 5 years to build the country’s best 5G dedicated frequency network. 5G technology is connected to the national first-level construction, promoting Asia New Bay Area as the most comprehensive 5G AIoT development field in Taiwan, form a new gateway for smart cities. The development of the park needs to be driven by the surrounding food, clothing, housing, transportation, and entertainment industries. From Luzhu to Qiaotou, the biomedical and optoelectronic industries are growing one by one. In the next ten years, it will create more than 200 billion output value and 10,000 jobs in Kaohsiung, connect the major parks in the south to jointly promote the development of southern Taiwan, participate in major global competitions, and attract talents from all walks of life to develop in Kaohsiung.

With stable water and electricity supply, and rich industrial human resources, Kaohsiung has various technology industrial parks, which can meet the investment needs of enterprises, and the government also raises investment incentives, R&D incentives, and talents subsidies. Moreover, Kaohsiung has 16 colleges and campuses, and 6 foreign schools with diversified specialties, and cultivates nearly 140,000 professionals every year.

Kaohsiung will also take urgent action to face climate change and its impact in accordance with the United Nations Sustainable Development Goals (SDGs). In 2021, an age when great harbors are surging, Kaohsiung faces directly to challenges. In the past 100 years, Kaohsiung has transformed from a small fishing village to a major industrial city; in the next 100 years, Kaohsiung will transform to an international smart harbor and a livable city embracing more possibilities