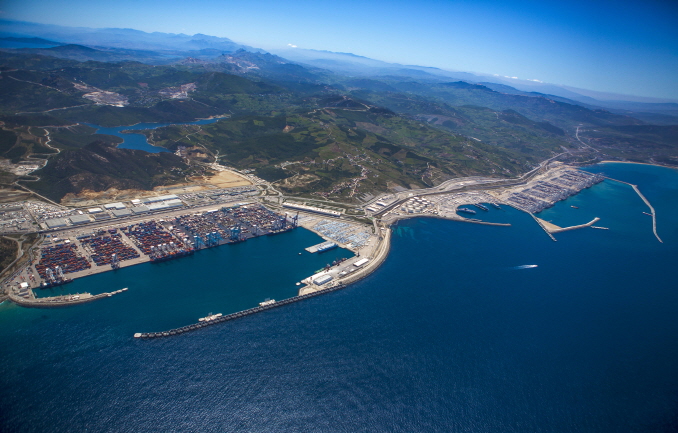 PROJECT DRIVEN BY A ROYAL VISION

Tanger Med is the fruit of the royal vision of His Majesty King Mohammed VI set out in his 2003 speech to make Tanger Med “an integrated regional development model”. Tanger Med consolidates the anchoring of the Kingdom of Morocco in the Euro-Mediterranean area and values its vocation as pole of exchanges between Europe and Africa, the Mediterranean and the Atlantic, and strengthens, at the same time, its central role as an active partner in international trade and well integrated with the global economy.

“Tanger Med complex is today the achievement of a royal ambition, voluntarist and visionary. The implantation site wanted by His Majesty the King for this project, at the crossroads of maritime routes has proved right and relevant “said Mr. Fouad BRINI, President of Tanger Med. Indeed, Tanger Med is located on the Strait of Gibraltar at the crossroads of the major maritime routes East / West and North / South connecting Asia, Europe, the Americas and Africa

Tanger Med 2 port is the third phase of development of Tanger Med Port Complex, alongside the Tanger Med 1 port and the Passengers & roro port.

This new port includes two new container terminals with an additional capacity of 6 million TEU containers. It aims to further strengthen the position of the Tanger Med Port Complex as a hub of reference, in Africa and in the world, for logistics flows and international trade, now having a total capacity of more than 9 million containers. First Port in Africa since 2018, Tanger Med has also become the 1st port capacity in the Mediterranean, and is committed to integrating the top 20 platforms worldwide.

The world leader MAERSK APM will develop the TC4 container terminal in the Tanger Med 2 port under a concession contract. This will be the 2nd terminal operated by the world leader at the port complex. The terminal incorporates the latest generation of ultra – modern container movement equipment. The private investment made is 800MUSD.

Tanger Med is a global logistics gateway located on the Strait of Gibraltar and connected to 186 ports worldwide with handling capacities of: 9 million containers, exports of 1 million new vehicles, transit of 7 million passengers and 700,000 trucks on an annual basis. Tanger Med constitutes an industrial hub for more than 900 companies representing a yearly export turnover in excess of 8.3 b USD in various sectors such as automotive, aeronautics, logistics, textile and trade.

Tanger Med is an integrated and structuring project, and an innovative governance model, particularly in terms of public-private partnership, and industrial-port synergy. To date, more than 9, 1 b USD have been invested, including 5,5 b USD by private operators.