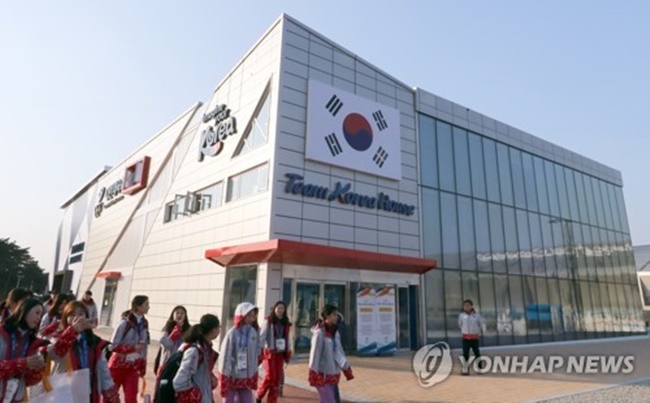 This photo shows Team Korea House, South Korea’s national promotional center within the Gangneung Olympic Park, a venue for the 2018 Winter Olympics near the host city of PyeongChang, on Feb. 8, 2018. (Image: Yonhap)

An opening event for Team Korea House was held at the three-story center located within Gangneung Olympic Park in Gangeung, a sub-host city of the PyeongChang Winter Games. Several other countries, including Japan and Switzerland, have also opened similar centers within the Olympic venue.

Built by the Ministry of Culture, Sports and Tourism, the center consists of three main areas divided up into three floors. Upon entering the center, visitors can learn about the host country, with areas for K-pop performances and traditional dance shows also set up on the first floor.

The second and third floors of the house are equipped with lounges and cushy sofas for athletes, journalists and visitors to relax and enjoy free beverages. A video analysis room is also available but will only be open toSouth Korean Olympic athletes.

The center is the eighth of its kind built at the Olympics since the 2004 Summer Games in Athens, Greece.

“We first started the Korea House project (back in 2004) after becoming jealous of centers run by Olympic committees of other countries,” Roh Tae-kang, vice sports minister, said in his welcome speech.

“Now Korea House has established itself as the place where foreign teams want to visit,” he added.

The committee plans to use the center as an avenue for sports diplomacy as well, with Thomas Bach, president of the International Olympic Committee, scheduled to make a visit on “Korea Night” next Tuesday.

South Korea has been gearing up to attract more tourists during the quadrennial event, which will be held in the country’s alpine town of PyeongChang, 180 km east of the capital, and its adjacent cities from Friday.