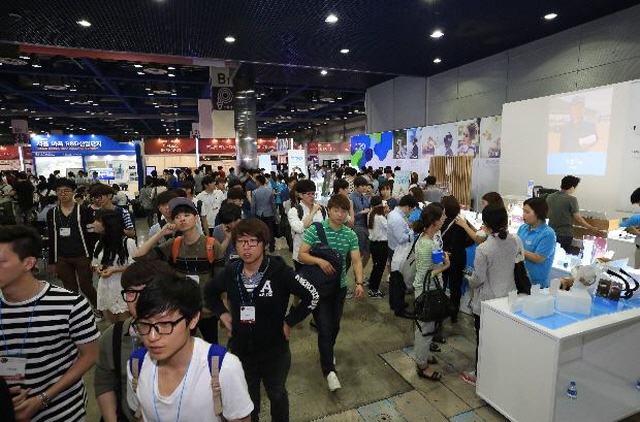 SEOUL, May 17 (Korea Bizwire) — South Korea’s top tech giants and mobile carriers promoted their latest technology at the World IT Show (WIS), which opened in Seoul on Tuesday to showcase smart solutions to everyday life.

More than 450 technology firms from home and abroad are participating in the annual event scheduled to continue through Friday.

Samsung Electronics, the world’s leading smartphone maker, promoted its latest flagship models, the Galaxy series, and appliances. The Galaxy S7 and Galaxy S7 Edge smartphones, first showcased at a trade fair in Spain in February, come with improved batteries, and are water and dust resistant.

Participants were able to put the Galaxy S7 Edge in water at Samsung’s booth to test its resistance.

LG Electronics also promoted its flagship smartphone model, the G5, which was unveiled earlier this year.

Visitors were able to wear the LG 360 VR, the virtual-reality headset, which is powered by a smartphone.

“I feel like our lives are getting smarter and more comfortable every day,” said Kim Myung-hyun, a 23-year-old visitor, at LG’s booth.

The mobile app allows users to get menu recommendations via Bluetooth on their smartphones and even place orders at certain restaurants.

The service allows a homeowner to remotely control home appliances like door locks, heaters, and vacuum cleaners in and outside the home with a mobile app.’