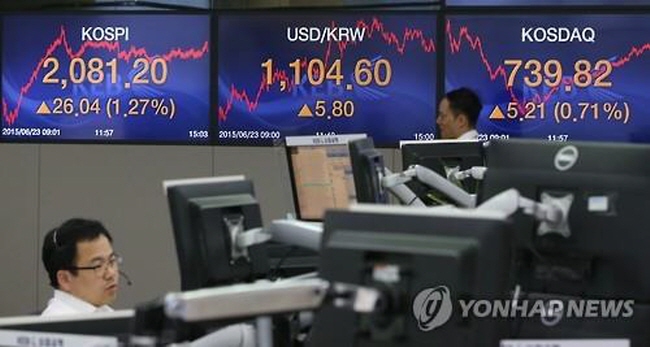 SEOUL, Jun. 23 (Korea Bizwire) — The capitalization of the tech-heavy KOSDAQ market surpassed the 200-trillion won (US$181 billion) level for the first time since its launch in 1996, driven by retail investors seeking higher returns and a bright earnings outlook, its operator said Tuesday.

The KOSDAQ market index, which tracks the prices of 1,077 companies on the secondary bourse, gained 0.7 percent to end at 739.82 points, hitting the highest in seven years and a half, the Korea Exchange (KRX) said. Its market cap first broke through 100 trillion won in 2007.’

The secondary bourse has enjoyed a sharp rally this year on the back of ample liquidity stemming from a series of rate cuts and rising expectation for bio and cosmetic firms. The index has jumped 33.6 percent as of Tuesday this year.

Although this year’s upward march is not as impressive as it was in the heyday of the early 2000s when the index hovered over 2,000 points, the recent boom stands on firmer footing as companies were expected to post strong earnings in the second quarter.

According to corporate researcher FnGuide, the combined sales of 126 firms traded on KOSDAQ are estimated to rise 17 percent on-year to reach 12.62 trillion won in April-June period.

The KRX vowed to expand support to facilitate the listing of promising venture firms to give the market a leg up.

“We will make efforts to improve the market’s stability by encouraging small- and medium- firms with innovative technology to list in the market,” the KRX said.

The market heavily depends on retail investors who account for 87.4 percent of the investor group as of the end-2014, but foreign investors and institutions are growingly betting on the market with high growth potential.