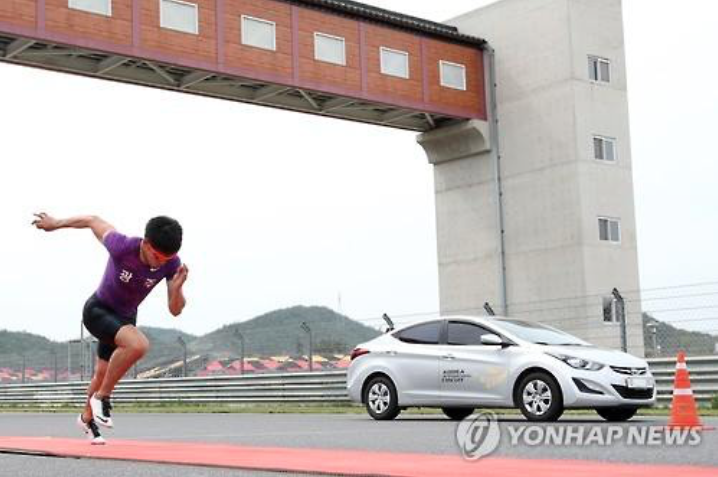 Kim’s competitor, a Hyundai Avante, crossed the line in a time of 7.544 seconds, with Kim tailing behind at 7.739. (image: Yonhap)

SEOUL, May 6 (Korea Bizwire) – A 70-meter dash race between man and machine, which took place at the 2016 Motor & Leisure Sports Festival in Yeongam on May 5, resulted in the defeat of  runner Kuk-young Kim by a margin of only .195 seconds.

Kim’s competitor, a Hyundai Avante, crossed the line in a time of 7.544 seconds, with Kim tailing behind at 7.739.

Both of the racers didn’t bring their ‘A’ games – the Avante’s record for 70 meters is 7.38 seconds, and Kim has clocked a 7.4 over the same distance.

There were high expectations for Kim, who had an advantage with a quicker reaction speed. He was hoping to use this advantage to win the race.

“I don’t want to sound like I’m making excuses but the strong winds didn’t allow me to start well. If circumstances allow, I’d like a rematch after Rio,” said Kim.

The driver, Bom-yi Kwon, was not permitted to touch either the wheel or the stick until the start was signaled, and the vehicle’s gear selector had to be kept in the ‘park’ position.

“Kim was very fast, but the car picked up speed in the latter half of the race. I think he was saving it for a gold medal in Rio,” said Kwon.

Kim set a new national record of 10.16 in the men’s 100-meter dash at the Gwangju Summer Universiade in July last year, where he also qualified for Rio 2016. He has been training for the upcoming Olympics with a personal goal of breaking the 10-second barrier.