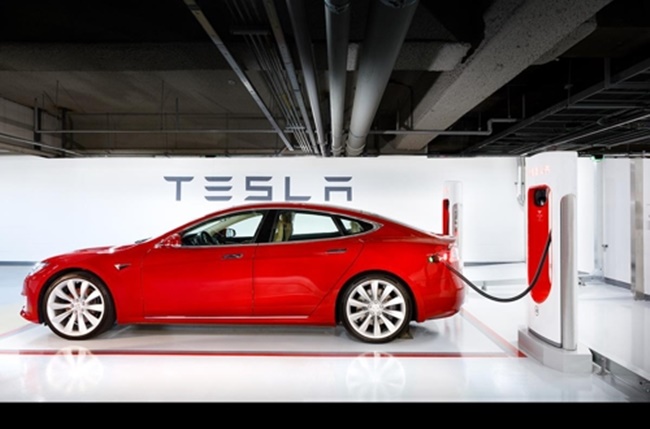 The first supercharger was built at the Grand Intercontinental Hotel in southern Seoul. The company’s luxury Model S 90D can run 270 kilometers on a 30-minute charge, Tesla said in an emailed statement. (Image: Yonhap)

SEOUL, May 25 (Korea Bizwire) – Tesla Motors Inc. has set up its first rapid-charging station in South Korea, the first of its planned 14 superchargers this year, the U.S. electric carmaker said Thursday.

The first supercharger was built at the Grand Intercontinental Hotel in southern Seoul. The company’s luxury Model S 90D can run 270 kilometers on a 30-minute charge, Tesla said in an emailed statement.

Tesla customers are currently allowed to use the supercharger free of charge. But the policy may change, it said.

Telsa plans to build 14 superchargers in major cities, such as Seoul, Busan, Daegu and Jeju Island to better serve local customers in a country whose charging infrastructure remains weak.

It has already built 35 slow-charging stations, or “destination chargers” at hotels, department stores and office buildings, and plans to add 20 by the end of June, the statement said.

Superchargers are able to provide 80 percent of battery capacity for a Model S vehicle in only 40 minutes, while taking one hour and 15 minutes to reach 100 percent. Six to eight vehicles can be charged at once at the stations.

As of Friday, Tesla has established 5,487 superchargers in 844 rapid-charging stations worldwide. It aims to double the number of superchargers this year to enhance customers’ convenience.

It has built more than 9,000 low-speed charging stations at hotels, resort towns and restaurants across the world.

Tesla has opened two showrooms in South Korea — one in the shopping mall Starfield Hanam just east of Seoul and the other in the affluent Cheongdam-dong in southern Seoul.

The Model S 90D is available for sale in the country, with actual deliveries of the model scheduled to begin in June. It has been taking preorders for the Model X and the Model 3 as well, although the timeframes for their actual launch have yet to be fixed.

Tesla Korea, a wholly-owned unit of the Californian company, didn’t provide how many preorders it received for the Model X and S from Korean customers. Tesla is led by Chief Executive Elon Musk who aims to bring fully electric vehicles to the mass market and send humans to other planets.