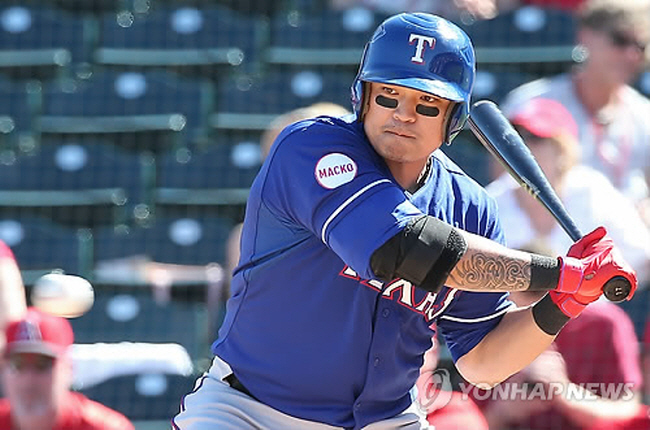 Choo is the first Asian to hit for the cycle in the majors, and the first Ranger since Alex Rios in September 2013. (image: Yonhap)

SEOUL, Jul. 22 (Korea Bizwire) — Texas Rangers’ outfielder Choo Shin-soo hit for the cycle for the first time in his big league career on Tuesday against the Colorado Rockies.

In Denver, Choo went 4-for-5 with a single, a double, a triple and a home run, while driving in three runs to help the Rangers beat the Rockies 9-0.

Choo is the first Asian to hit for the cycle in the majors, and the first Ranger since Alex Rios in September 2013.

Choo had an RBI double in the second, a solo shot in the fourth and a run-scoring single in the fifth. He had the triple, considered the most difficult part of the cycle equation, in his final at-bat in the ninth inning.

Even after the big day at the plate, Choo is still batting just .235. He does have 12 home runs to go along with 42 RBIs.

The 33-year-old had a disastrous start to the season, batting just .096 in April. He bounced back with a strong May, hitting .295 with six home runs, but came back down to earth in June by hitting .225.