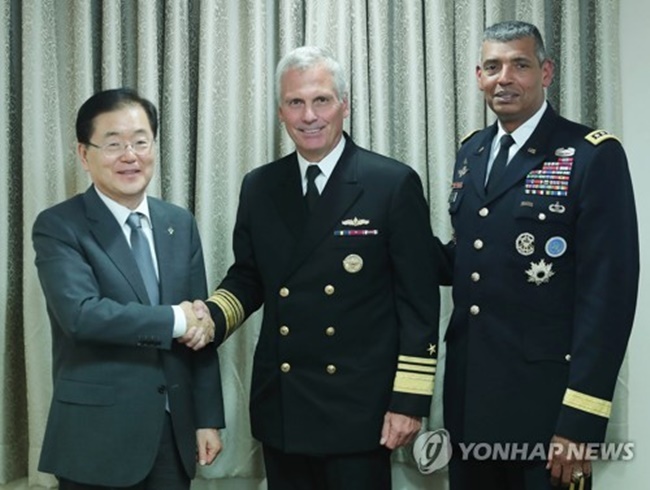 The move came one day after President Moon Jae-in personally ordered a thorough study on the environmental impact of the advanced missile shield, which, when fully deployed, will consist of at least six rocket launchers with 48 rockets designed to intercept aerial threats flying over the peninsula.

The system has been and currently is subject to a “small, informal” environmental assessment afforded by what Seoul’s presidential office Cheong Wa Dae has referred to as systematic efforts by the country’s defense ministry to make the THAAD battery appear smaller in size and scale.

Under an agreement, Seoul is set to provide some 700,000 square meters of land for the deployment of the missile defense system to be operated for and by U.S. Forces Korea but will boost the country’s own defense capabilities as well.

Under the law, any new installation of equipment or facilities that affect more than 330,000 square meters of land must first be assessed for their environmental impact before being deployed or built.

The THAAD system, however, was able to be deployed here as the defense ministry provided only 320,000 square meters of land first, subjecting it only to the ongoing “small and informal” evaluation.

The remaining 380,000 square meters of land promised under the THAAD agreement is set to be provided later, again exempting the THAAD deployment from a full-blown environmental impact assessment, Cheong Wa Dae said earlier, citing the outcome of its recent probe on the issue.

The special probe was initially triggered by suspicions that the defense ministry had omitted the delivery of four THAAD rocket launchers into the country in its report to the president and his de facto power transition team.

Cheong Wa Dae said the probe has confirmed an “intentional omission” of such facts by a ministry official. He was relieved of his duty after the probe.

A new investigation is now under way to find out who had designed the supply of the land for THAAD in such a way that it was successfully kept from a full-blown environmental impact assessment.

“The order to conduct an environmental impact assessment is a guideline to enhance the procedural legitimacy of the deployment, so the defense ministry will review ways to conduct such a study,” Defense Minister Han Min-koo has said.

The problem is that a new full-blown test may take up to a year and also delay or suspend the ongoing deployment of the THAAD system over the period.

The THAAD agreement was signed by the former administrations of both South Korea and the U.S., and the new Donald Trump administration is already showing signs of reservations, with the U.S. president also mentioning a need to renegotiate the terms to have Seoul pay for the U.S. defense system.

Cheong Wa Dae maintains the controversy over the THAAD deployment is strictly local and that Washington understands that as well.

In a meeting with USFK commander Gen. Vincent Brooks and the visiting director of the U.S. Missile Defense Agency V. Adm.

James Syring in Seoul on Monday, Chung Eui-yong, Seoul’s top security adviser to the president, again explained that the recently concluded probe on the THAAD deployment and the proposed study on its environmental impact were moves to secure or enhance the legitimacy of the deployment, the presidential office said earlier.

Brooks and Syring expressed gratitude for his explanation and said they fully understood the South Korean government’s position, it added.