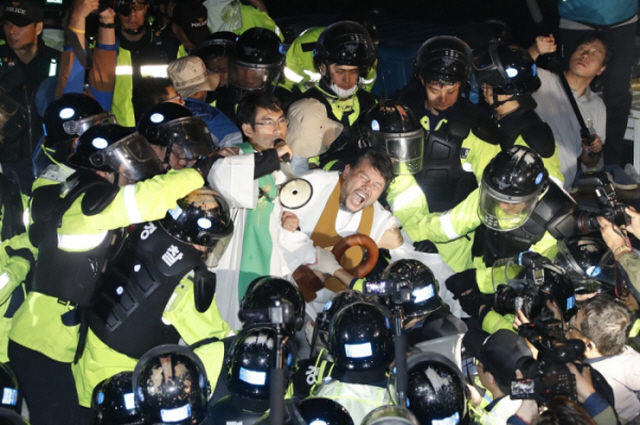 Police disperse protesters outside a community center in Seongju, some 300 kilometers south of Seoul, on Sept. 7, 2017. (image: Yonhap)

SEONGJU, Sept. 7 (Korea Bizwire) — Four more interceptor launchers for a U.S. missile defense system entered a southern military base Thursday after clashes between police and protesters that resulted in dozens of injuries.

The arrival of the launchers and other equipment came some 14 months after Seoul and Washington decided to deploy the Terminal High Altitude Area Defense (THAAD) system to Seongju, some 300 kilometers south of Seoul, to counter escalating North Korean threats.

Clashes occurred throughout the night as some 400 residents fought police officers near their community center in Seongju.

About 10 U.S. military vehicles carrying the THAAD equipment left Osan Air Base, some 70 kilometers south of Seoul, at 0:32 a.m. Police dispersed the residents around 5 a.m., clearing the way for their entry into the base at 8:20 a.m.

Police said some 8,000 officers were sent to the area near the deployment site. Dozens of locals and police officers sustained injuries, and were taken to nearby hospitals.

“The current administration, like the former Park Geun-hye administration, is committing an illegal act,” a local official said. “We cannot accept THAAD under any conditions.”

Two truck-mounted launchers and a powerful X-band radar are currently in operation at the base. A THAAD battery is known to require at least six rocket launchers, also involving a fire control and communications unit.

“The government promised to inform us a day before the additional deployment. It is a trick for the police to drive us out of our rally site just a few hours after we received the notification,” said a resident who identified himself as a 30-year-old surnamed Lee.

Some protesters wound chains around their necks and locked their bodies onto trucks that blocked the roads to the site.

Others tied ropes around their bodies and formed a line to stop the police from separating them.

Local residents have protested the THAAD deployment for fear that their town may turn into a primary target for North Korean attacks.

They are also concerned that electromagnetic waves emanating from the cutting-edge radar could cause health and environmental problems.

The deployment comes amid heightened tensions on the Korean Peninsula over North Korea’s missile and nuclear tests.

On Sunday, North Korea carried out its sixth and most powerful nuclear test in further defiance against international pressure over its nuclear and missile programs.

China and Russia have strenuously opposed the THAAD deployment, viewing it as aimed at bolstering Washington’s military presence in the region and undermining their security interests. Seoul and Washington have claimed it is only for self-defense against the North.

In Beijing, Chinese Foreign Ministry spokesman Geng Shuang expressed grave concerns over the planned additional installation as he urged South Korea and the U.S. to withdraw the THAAD system.