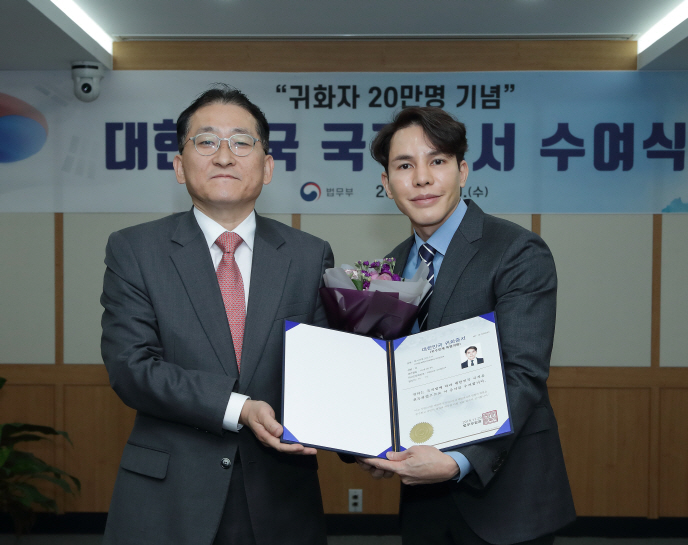 The ministry held a ceremony to award citizenship certificates to the 15 people who obtained South Korean nationality most recently.

They include Krisda Chaemsaithong, an English language and literature professor of Hanyang University in Seoul.

The others are five people from Uzbekistan, four from Armenia and one each from the United States, Mongolia, Taiwan, Russia and China.

“While living in Korea, I got to truly love the Korean people and culture,” the professor said in the event.

“Since I obtained citizenship in recognition of my academic achievements, I will try to contribute more to the Republic of Korea’s academic development and nurturing of talents.”

Also attending were a Chinese-born descendant of the late independence fighter Kim Jung-kyu and an Uzbek-born man who has been in South Korea for 11 years to study and work.

“I wish for you to take pride in your new Korean nationality and exercise your rights guaranteed by Korea’s Constitution and laws, while not forgetting that you should fulfill your duties and responsibilities as a citizen.” Acting Justice Minister Kim Oh-soo said in a speech read by Cha Gyu-geun, commissioner of the Korea Immigration Service.

The South Korean government, founded in 1948, accepted its first naturalized citizen, a Taiwanese man, in February 1957.

The number of those naturalized increased by 33 per year until 2000 and began to grow sharply in the early 2000s as more foreigners came to the nation for marriage, travel, work and study, according to ministry data.

The accumulated figure exceeded 100,000 in January 2011. About 11,000 people per year obtained South Korean nationality over the past 10 years, the ministry said.