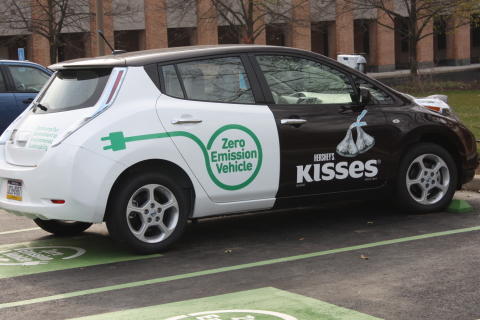 Hershey’s electric car fleet is one of many environmental initiatives. (photo courtesy of BusinessWire)

HERSHEY, Pa., June 6 (Korea Bizwire) – The Hershey Company (HSY) was recognized today for its continuing  commitment to environmental stewardship by Newsweek in its 2014 Green  Rankings. Out of the top U.S. 500 companies named, Hershey placed 46,  moving up 210 spots from the last ranking, in 2012.

“At Hershey, environmental stewardship is simply good business and  something we’re passionate about,” said Terence O’Day, Senior Vice  President, Chief Supply Chain Officer. “’Doing well by doing good’ is  part of our heritage, tracing back to our founder, Milton Hershey,  creating a recycling center in 1937. We are honored to be carrying  forward this legacy of environmental sustainability, driven by the  passion of our employees to protect the environment.”

Hershey recently announced significant achievement against its  aggressive environmental sustainability goals in its third corporate  social responsibility report (CSR). Since 2009, Hershey has achieved  73 percent water reduction, 22 percent emissions reduction, 38 percent  waste reduction and 11 zero-waste-to-landfill facilities, with a total  of 97 percent of U.S. production occurring at one of these facilities.

In the Food and Beverage category, Hershey was named as the No. 7  company. The company ranked No. 256 overall, when the report was last  released. When Hershey first appeared on the Newsweek Green Rankings in  2010, the company was ranked No. 399.

The ranking includes the 500 largest publicly traded companies in the  U.S., evaluating them based on their success in increasing revenue while  reducing their environmental impact. A total of eight factors are taken  into account, including carbon, energy, waste, water and the extent of  internal governance toward sustainability.

About The Hershey Company

The Hershey Company (HSY), headquartered in Hershey, Pa., is a  global confectionery leader known for bringing goodness to the world  through its chocolate, sweets, mints and other great-tasting snacks.  Hershey has approximately 13,000 employees around the world who work  every day to deliver delicious, quality products. The company, which has  more than 80 brands around the world that drive over $7.1 billion in  annual revenues, includes such iconic brand names as Hershey’s, Reese’s,  Hershey’s Kisses, Jolly Rancher and Ice Breakers. Hershey is focused on  growing its presence in key international markets while continuing to  build its competitive advantage in North America. Additionally, Hershey  is poised to expand its portfolio into categories beyond confectionery,  finding new ways to bring goodness to people everywhere.

At Hershey, goodness has always been about more than delicious products.  For 120 years, Hershey has been committed to good business by operating  fairly, ethically and sustainably to make a positive impact on society.  This means contributing to a better life for its employees, consumers,  communities, and, ultimately, creating a bright future for children in  need. This commitment is exemplified by Milton Hershey School,  established in 1909 by the company’s founder and administered by Hershey  Trust Company. The children who attend the school receive education,  housing, and medical care — thriving as direct beneficiaries of The  Hershey Company’s success.

Source: The Hershey Company (via BusinessWire)