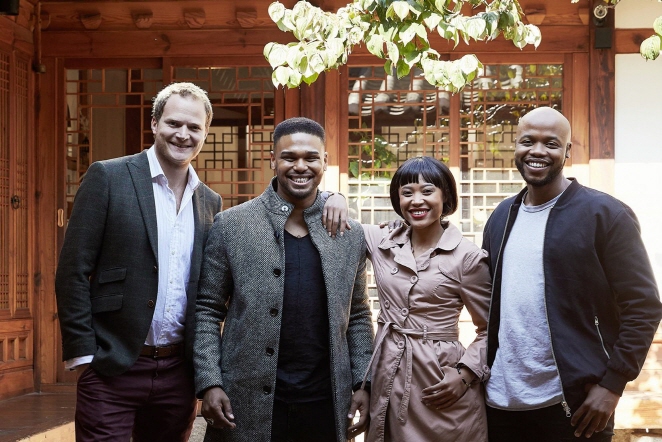 Despite the characters of the musical being animals, the actors who play them say that the musical is a story about human emotions. (image: Clip Service Co.)

SEOUL, Nov. 2 (Korea Bizwire) – The world-renowned musical “The Lion King” based on the Disney animated feature of the same name is touring the nation, starting with Daegu on November 7 followed by performances in Seoul and Daegu next year.

Despite the characters of the musical being animals, the actors who play them say that the musical is a story about human emotions.

“The musical deals with all emotions that human beings have,” said one actor. “It’s about love, friendship, loss and betrayal.”

Actors Calvyn Grandling and Josslynn Hlenti, who play the lead roles of “Simba” and “Nala,” respectively, met with Korean reporters at a traditional Korean building in Jongno-gu yesterday along with other major cast members.

The musical is directed by Julie Taymor, who was the first woman to receive a Tony Award, for her direction of “The Lion King” in 1998.

Taymor created a way for actors to effectively carry out their animal roles by incorporating puppet elements to their costumes instead of having actors cover their faces and bodies with animal costumes.

This method of portraying animals by actors allowed them “to reveal both the animal and human sides of themselves,” according to actor Anthony Lawrence who plays “Scar,” adding that this allows the story about animals to project human emotions.

Meanwhile, the actors who were present at the press event were astounded at the response from the Korean public.

With two to three months still left to go until the opening of the Seoul shows, most of the main seats for the weekend performances have been sold out.

Based on the 1994 Disney animation, “The Lion King” was first made into a Broadway musical in 1997 and has since been seen by 95 million people around the world.

As part of its 20th anniversary, South Korea has been included in a world tour lineup that included Manila and Singapore earlier in the year.

After performances in Korea, the musical is expected to tour in Taiwan and South Africa.