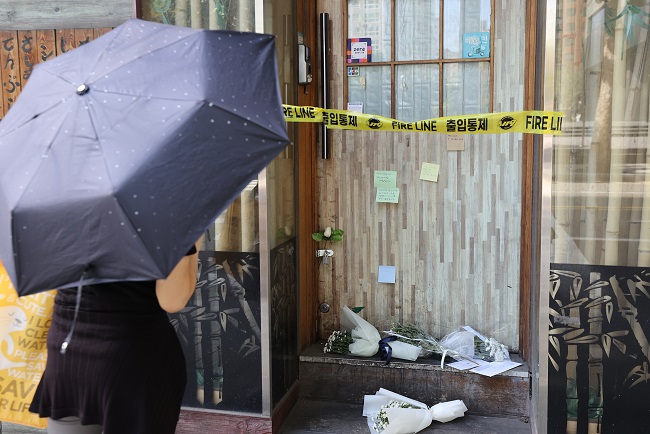 A person looks at memos and chrysanthemums placed in front of a beer hall in Seoul on Sept. 14, 2021, after its owner apparently took his own life a week earlier due to COVID-19-related business difficulties. (Yonhap)

SEOUL, Sept. 15 (Korea Bizwire) – At least three self-employed people nationwide have been found dead over the past week in apparent suicides probably related to business difficulties in the time of COVID-19, police said Wednesday.

A 52-year-old man who ran an entertainment establishment in the central city of Wonju was discovered dead in his home Monday, police said, withholding his identity.

According to the Wonju Police Station, the man appeared to have been dead for several days and no will was found at the scene.

The man, who ran his entertainment establishment for nearly five years in the Gangwon Province city, 130 kilometers southeast of Seoul, was said to have experienced business difficulties due to strict social distancing restrictions imposed to fight COVID-19.

The man had allegedly spoken about his difficulties to his acquaintances, who said he was unable to pay his rent for several months.

An acquaintance said the man had difficulty paying his monthly rent of 2.5 million won (US$2,140) because of various business restrictions linked to COVID-19.

Over the past week, two other self-employed workers in Seoul and the southwestern city of Yeosu apparently took their own life after having long suffered business difficulties caused by tough social distancing restrictions.

A man in his 50s who ran a beer hall in Seoul’s Mapo district was found dead last Tuesday after racking up huge debts due to strict business limitations, while a Yeosu man who ran a chicken restaurant died Sunday after leaving a note in which he said he was having economic difficulties.

Self-employed workers nationwide have condemned health authorities for endangering their livelihoods in a drive to combat COVID-19 through tough social distancing restrictions.

They have demanded the government relax COVID-19 restrictions and provide more compensation for financial losses stemming from the social distancing scheme that restricts operations of cafes, restaurants, gyms and karaoke rooms, among others.

Restaurants and cafes, for instance, have to close by 10 p.m. and are allowed to serve only takeout and delivery from 10 p.m. to 5 a.m.