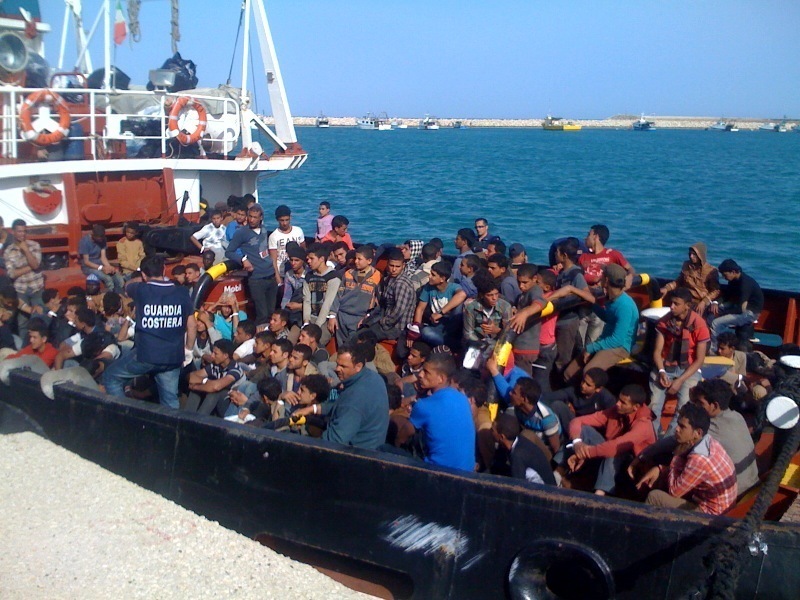 “There were 27 people from my town who I knew on the boat that sank off the Libyan coast on October 11, 2013. One of them was my neighbor. They are all dead. Despite this, I wasn’t afraid to get on a boat and face the same fate. Death by death, we’ve tried new routes, because nobody wants Syrians anymore — neither in Lebanon, nor Egypt nor Libya.” (image: Save the Children/ PR Newsfoto)

FAIRFIELD, Conn., June 27, 2014 (Korea Bizwire)–The number of Syrians clandestinely crossing the Mediterranean has risen dramatically since March, with thousands more families likely to attempt the dangerous passage this summer, as the “boat season” gets underway.

Save the Children’s latest report, “The Boat is Safe” and Other Lies: Why Syrian Families are Risking Everything to Reach Europe,” tells the harrowing stories of families who survived the journey to Italy.

The sea passage is facilitated by people smugglers, charging families between $1,500 and $3,000 to travel on dilapidated and makeshift boats. The journey can take up to 15 days, and survivors describe extreme conditions, frightening close calls, having no or very little food and water, and desperate waits to be rescued when things go wrong. Not all are rescued in time.

“The majority of families we meet fled the war in Syria one or two years ago, having left behind loved ones, survived extraordinary levels of violence, escaped recruitment, and seen their homes, towns and villages destroyed,” said Carlotta Bellini, head of Child Protection for Save the Children Italy. “They have lost everything, but instead of finding safety, they continued to face severe hardships, exploitation, discrimination, and threats in other countries, before they finally attempted the perilous crossing of the Mediterranean.”

At least a sixth of those who attempt the sea journey to Italy – from Africa and elsewhere in the Mediterranean basin – are children: of the 41,200 migrants the Italian Navy rescued between January and May 2014, 6,700 were minors. Eritrean and Syrian children are the largest group arriving by sea. By the end of May, Italian authorities had rescued more than 3,800 children from the two countries, some of them very young – tragically highlighted when the Italian Navy recovered, amongst others, the bodies of a baby and a very young child when a boat capsized off the Libyan coast in May. Eritrean children, also fleeing persecution in their home country, predominantly travel on their own, and are usually in their teens. The average age of Syrian children undertaking this journey is five, the vast majority of whom traveled with their parents. Both groups of minors need appropriate care.

The number of Syrian refugees crossing clandestinely into Italy started rising in July 2013, when more Syrians arrived in Italy than during the whole of 2012. This trend peaked last September, with more than 4,100 new Syrian arrivals, of whom more than 1,400 were children. While numbers declined during the winter months, they have been going up consistently since April, when around 16,700 migrants were rescued in Italian waters, of whom more than 2,300 were Syrians. Thousands of Syrian and other children are expected to follow suit throughout the summer months.

The numbers of people fleeing violence and war is now higher than it has ever been since the end of World War II, and half of the world’s refugees are children, according to UNHCR. Developing countries continue to host the vast majority, with millions living in overcrowded or squalid camp conditions. To ensure these children have a chance at a better future – especially the most vulnerable, such as the injured and sick – and prevent further loss of life in the Mediterranean over the summer, EU States must play their part to provide protection to families in desperate need of sanctuary.

“During the journey across the desert from Egypt to Libya, we were all shoved together like cattle in pickup trucks. There were about two hundred of us on the boat, all on top of one another. The sea conditions were terrible, and we were extremely frightened. When they decided to stop to burn all our extra clothes and personal belongings in order to lighten the load, we feared for our lives and the lives of the children. They left us without any reminder of our beloved Syria. We’d never thought of making a similar journey.” Rama, mother of young Malik, whose family travelled with three others across the sea from Libya

Save the Children gives children in the United States and around the world a healthy start, the opportunity to learn and protection from harm. We invest in childhood – every day, in times of crisis and for our future. Follow us on Twitter and Facebook.

Source: Save the Children (via PR Newswire)