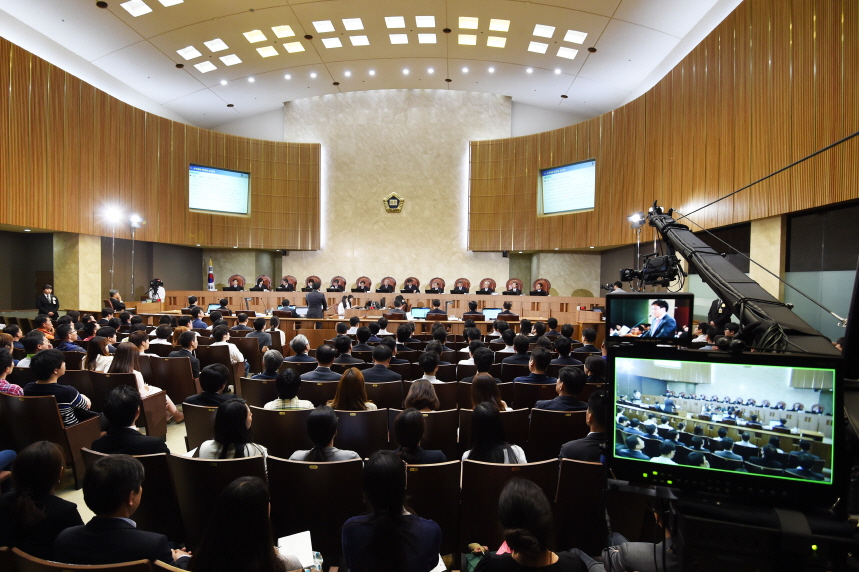 The Supreme Court announced the decision following a meeting of chief justices presided over by Chief Justice Yang Sung-tae. The revised rule will take effect Aug. 1.

Under the new regulation, the court no longer requires the defendants’ consent to broadcast trials if the cases are deemed to carry more weight for public interest.

Currently, any form of recording or live coverage of a court proceeding is banned by court regulations. Limited media coverage before the court starts hearings is possible at the defendants’ consent or the court’s approval. Only the Constitutional Court films all proceedings and discloses them online.

The change in the court rules will likely lead to a national televised coverage of Park’s trial when the Seoul Central District Court is set to deliver its first ruling on the disgraced leader in October.

Park was stripped of power by the March 10 constitutional ruling on her impeachment. She was arrested later that month on a string of charges, including taking bribes from Samsung by colluding with her longtime friend Choi Soon-sil, who’s also detained in connection with the nation-rocking scandal.

The top court hinted at televising the high-profile trials in late May, as it conducted a survey on some 2,900 judges in the country asking their opinions on expanding the scope of live broadcasting of trials.

The poll showed that 68 percent of the judges agreed to televising the court proceedings, on the condition that they’re cases under public scrutiny.

The first trial of Park on May 23 was aired for only a few minutes due to such limitations, and so were the trials of the two former general-turned-Presidents Chun Doo-hwan and Roh Tae-woo, who were convicted of subversion and stashing away massive secret funds in the 1990s.

An exception was made at the discretion of the chief justice in August 2014 for the bereaved families of victims in the tragic sinking of the Sewol ferry in April. They remotely watched live the trial on officials of the firm that owned the Sewol, who were charged with negligence.

There has been a heated debate on the issue. Advocates argue that it serves to benefit the public’s right-to-know, while skeptics say it’s a populist system that can hinder fairness and the independence of the judiciary.