“Recent external factors, including a sharp fall in the Chinese stock market, Chinese yuan devaluation and a possible U.S. rate hike, dragged down the South Korean market. As the external shocks will continue to weigh on South Korea for a while, we have to make all-out efforts to alleviate the volatility of the local capital market. We will check every risky external and internal factor, and take pre-emptive steps to deal with them.”

“The overnight inter-Korean agreement to end military tensions triggered by the North’s land mine provocation will likely help stabilize the stock market.” 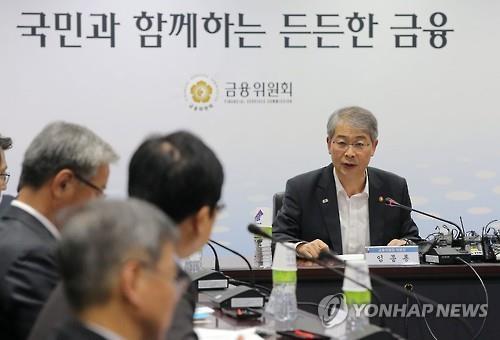 The benchmark KOSPI tumbled to a two-year low on a China stock rout on Monday, with the Chinese bourse nosediving more than 8 percent.

Financial Services Commission Chairman Yim Jong-yong said that in order to boost investor sentiment and relax fears, the financial authorities will give timely and precise information on the South Korean economy to market players and prevent any misleading decisions.

The finance ministry said it, along with other financial regulators, will maintain around-the-clock monitoring of global market developments that could come as a drag on Asia’s fourth-largest economy.

“The government will keep tabs on overall market developments and devise contingency plans to reduce possible fallout on the economy,” it said.