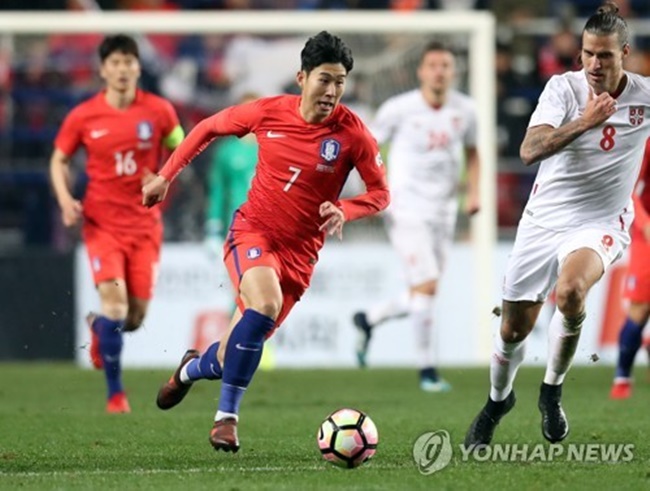 Son earned the honor at the annual Korea Football Association (KFA) Awards. This is Son’s third KFA Player of the Year accolade after 2013 and 2014. He is now tied with Swansea City midfielder Ki Sung-yueng for most top player awards. (Image: Yonhap)

Son earned the honor at the annual Korea Football Association (KFA) Awards. This is Son’s third KFA Player of the Year accolade after 2013 and 2014. He is now tied with Swansea City midfielder Ki Sung-yueng for most top player awards.

He scored 168 points in a vote by football reporters and the KFA coaches, edging out Jeonbuk Hyundai Motors midfielder Lee Jae-sung, who scored 131 points. Lee is MVP of the K League Classic and the East Asian Football Federation E-1 Football Championship.

Son played in nine of 13 international matches for South Korea this year, and scored three goals. He was instrumental in South Korea’s qualifying for the 2018 FIFA World Cup.

The 25-year-old was also impressive in the English Premier League (EPL). He netted 21 goals in all competitions for the Spurs during the 2016-2017 season, breaking the single-season scoring record for a South Korean in Europe, previously held by Cha Bum-kun, who had 19 goals for the German outfit Bayer Leverkusen in the 1985-1986 season.

Son also surpassed Park Ji-sung to become the highest-scoring Asian player in the EPL history with his 20th career goal earlier this season.

Son wasn’t able to attend the awards ceremony at Some Sevit in Seoul since the Spurs are still in the middle of the season.

Lee Min-a was named the top female player of the year. This is the first time that she won the top honor.

For this year, she collected 14 goals and 10 assists in 28 matches to help her club Incheon Hyundai Steel Red Angels to win the WK League title.

The 26-year-old midfielder, who has six goals in 38 caps, also helped South Korea qualify for the 2018 Asian Football Confederation (AFC) Women’s Asian Cup. The Taeguk Ladies finished atop the qualifying campaign in Pyongyang in April over North Korea, Uzbekistan, Hong Kong and India.