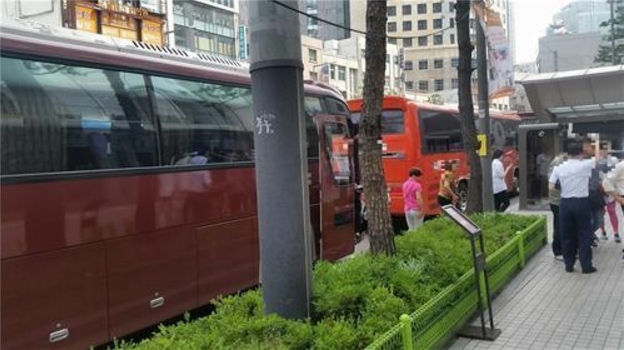 Due to a lack of designated parking spaces for vans and buses near hotels and duty free shops, they are often parked illegally on the street. (image: Yonhap)

SEJONG, July 20 (Korea Bizwire) – The Ministry of Land, Transport and Maritime Affairs (MOLIT) announced on July 19 a revised decree regarding parking lot regulations that will go into effect on July 20.

The new regulations primarily concern parking spaces around facilities frequently visited by vans and tour buses. Due to a lack of designated parking spaces for vans and buses near hotels and duty free shops, they are often parked illegally on the street.

Accordingly, local government officials can now make the construction of these parking spaces mandatory for tourist attractions. Upon judgment of local authorities, a parking facility may be temporarily used for a marketplace if it does not interfere with the operation of the facility.

The revised regulations also require that at least 10 percent of off-street parking spaces be designated for compact cars and environmentally-friendly vehicles – an effort to promote green cars. Currently only 5 percent of parking facilities are assigned to compact vehicles.

Furthermore, the new regulations allow part of a parking facility that is subject to a traffic impact assessment to be used for other purposes if the facility supports car-sharing operations.

Automated parking towers, some outdated or non-operational due to mechanical problems, are usually not demolished because the reconstruction of replacement parking spaces that can accommodate the same number of vehicles is costly.

To solve the issue of demolishing obsolete mechanical parking systems and building alternative ones, local government bodies can ease regulations and adjust the vehicle capacity within a 50 percent range. On the other hand, the management body or personnel of automated parking systems will be fined if no instructions on how to use the system are displayed or inspections are not conducted periodically.

Furthermore, additional parking spaces that were previously only allowed to be constructed on land designated for parking spaces can now be built on any parcel without restrictions.

Any lodging facility such as an officetel (a portmanteau of ‘office’ and ‘hotel’) that is operated on an individual room basis will be required to have an equal number of parking spaces and rooms.