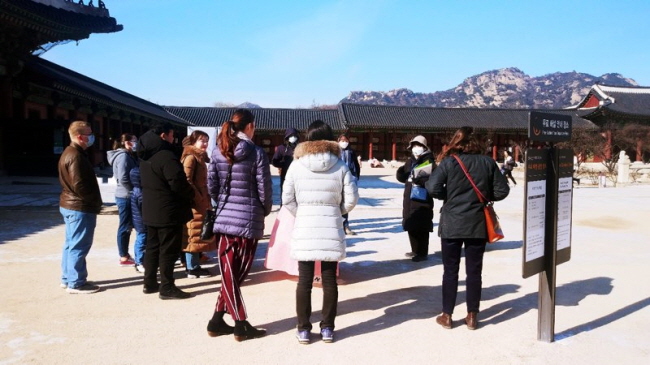 Starting on Saturday, the docent services at the four Joseon-era royal palaces will temporarily go out of service, according to the administration.(image: Cultural Heritage Administration)

SEOUL, Feb. 6 (Korea Bizwire) — The Cultural Heritage Administration said Thursday it will suspend tour guide services at major heritage attractions in central Seoul starting this week in a measure to fight the spread of the novel coronavirus.

Starting on Saturday, the docent services at the four Joseon-era royal palaces, including Deoksu and Changdeok palaces, as well as Jongmyo Shrine and the Joseon-era royal tombs will temporarily go out of service, according to the administration.

The agency will also allow visitors’ unguided tours at the back garden of Changdeok Palace and Jongmyo Shrine, where only guided tours were permitted previously.

On Tuesday, the administration temporarily suspended tourist visits to Deoksu Palace’s three-story stone building, Seokjojeon, where visitors are not allowed in without a tour guide.

“The decisions were made in efforts to best prevent the spread of the epidemic among citizens, tourists and employees at a time when public concerns are rising over visits to public places,” the administration said.

As part of the preventive efforts, highly frequented spots of the major heritage tourist sites, including ticket boxes and restrooms, are currently being disinfected on a daily basis, it said.